Skipper Rohit Sharma on Sunday lauded Hardik Pandya’s brilliance with bat and ball after the all-rounder guided India to a thrilling five-wicket win over Pakistan in the Asia Cup Twenty20 tournament.

Chasing 148 for victory, Ravindra Jadeja, who hit 35, and Pandya, unbeaten on 33, put on a key fifth-wicket stand of 52 as India achieved the target with two balls to spare in Dubai. 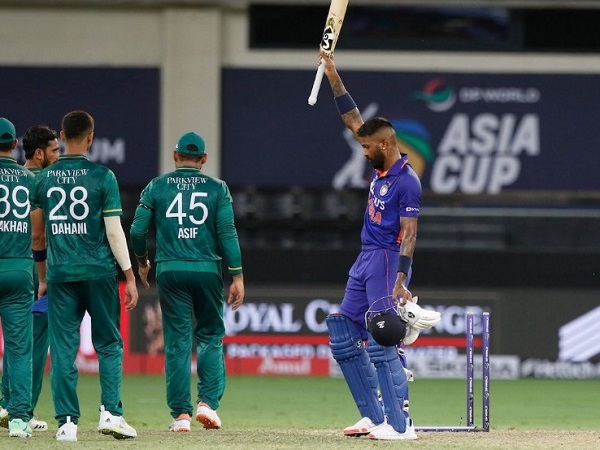 Pace bowlers Bhuvneshwar Kumar and Pandya shared seven wickets to set up victory for India in their opening match as they bowled out Pakistan for 147.

Pandya, who returned figures of 3-25 with his medium-pace bowling, then stood calm to hit the winning six in a tense chase in the six-nation tournament which acts as a tune-up for the T20 World Cup in October-November in Australia.

India, who lost their previous match with to Pakistan by 10 wickets in last year’s T20 World Cup at the same venue, improved their win-loss record to 8-2 against the arch-rivals in Virat Kohli’s 100th T20 international.

But Pandya, who earlier this year made a comeback into the national team after recovering from a career-threatening back injury, made the match his own.

“Since the time he (Hardik) has made his comeback, he’s been brilliant,” Rohit said of the champion all-rounder, who led IPL debutants Gujarat Titans to the title in May.

“He is a lot calmer now and more confident about what he wants to do, whether it’s with the bat or with the ball. He can bowl really quick, we saw that today with those short balls.

“It was always about just understanding his game and he’s doing that well now. In a high-pressure chase with 10 runs per over needed, you can panic but he never showed any of that.”

Debutant pace bowler Naseem Shah stood out for Pakistan with figures of 2-27 but a foot injury in the last few overs had him limping as India took control with the right-left batting pair of Pandya and Jadeja.

Pakistan kept chipping away with wickets as Naseem bowled Suryakumar Yadav for 18 and Mohammad Nawaz rattled the stumps of Jadeja in the final over.

Kohli scored 35 before falling to Nawaz’s left-arm spin that also claimed Rohit for 12.

Naseem struck early with the wicket of KL Rahul for nought as the opener dragged an express delivery on to his stumps.

The 19-year old Naseem nearly got Kohli out two balls later only for Fakhar Zaman to drop a catch at second slip.

“Naseem bowled well at the start, He took crucial wickets and bowled well in the death as well,” Azam said of his young bowler.

“We missed Shaheen (Shah Afridi) but he never let us feel his absence. It was his confidence that made him bowl like that.”

Kohli, who has endured a prolonged lean patch and recently spoke of his mental health struggles, overcame initial jitters and seemed to find his flow with a few convincing boundaries including a wristy drive over mid-on before getting out.

Earlier Kumar set the tone for India’s dominance as he dismissed Azam for 10 in the second over and returned figures of 4-26.

Pandya rattled Pakistan’s middle-order with his three wickets including the dangerous wicketkeeper-batsman Mohammad Rizwan who had hit 43 off 42 balls.

Kumar returned to take two wickets in two balls in the penultimate over but was denied a hat-trick by number 11 Shahnawaz Dahani.

Dahani smashed two sixes in his six-ball 16 before being bowled by left-arm medium-pace bowler Arshdeep Singh, who took two wickets as Pakistan’s innings folded in 19.5 overs.