Great twenty20 series win for Australian cricket team ahead of ICC World T20 as they have defeated South Africa in their home conditions. In the third and final T20I of series, Australia beat Africa by 6 wickets with 4 balls remaining in the match to win bilateral series by 2-1. Proteas batsman Hashim Amla was given player of the match whereas Australian David Warner was awarded Man of the series trophy. 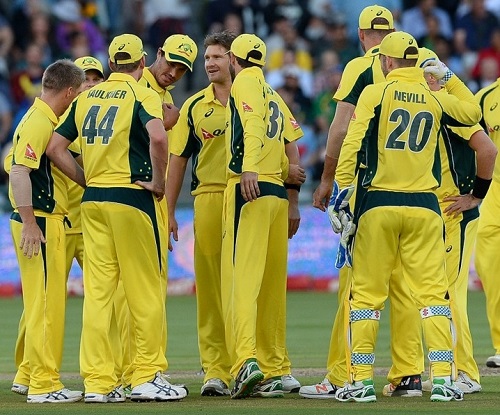 In the series decider game, South Africa won toss and chose to bat. Top order batsmen performed very well for the team and scored big runs, especially opener Hashim Amla who replaced AB De Villiers in this match. Amla made 97 runs in 62 balls with the help of 4 sixes and 8 fours. David Miller hit 30 runs in 16 balls towards the end of innings that took Proteas total to 178 runs in 20 overs.

Nathan Coulter-Nile took 2 wickets in African 4 wickets fall in the innings. It wasn’t easy target but the way Australian batting line up has been playing these days, it was quite interesting to see whether home team could stop them or not. Eventually they failed to stop Aussies from winning the match and series.

Australia had brilliant start in the run chase as openers Usman Khawaja and Shane Watson added 76 runs for the first wicket partnership in just 8.2 overs. Imran Tahir gave double blow to visitors as he dismissed both openers in the 9th over. After this, Aussie skipper Steve Smith And David Warner played sensible innings to guide Australia towards 6 wickets victory. Hence Australia won series by 2-1 as they also won previous match at Johannesburg.