Riding on impressive performances by Glenn Maxwell (57 off 33) and Yuzvendra Chahal (3/29), Royal Challengers Bangalore (RCB) beat Punjab Kings by six runs in the 48th match of the IPL 2021 and sealed the playoffs berth, at Sharjah Cricket Stadium, here on Sunday. 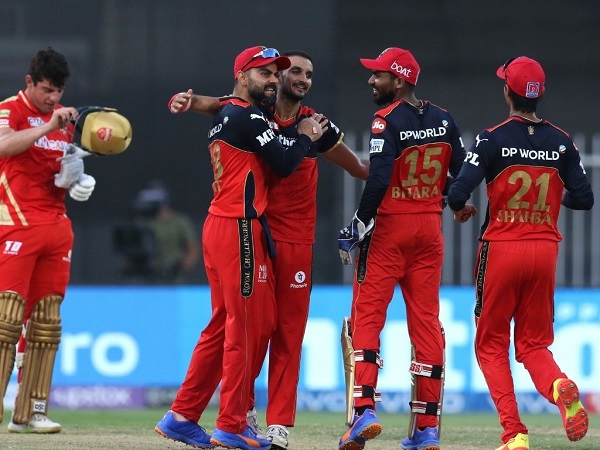 With this win, RCB, who now have 16 points, joined Chennai Super Kings and Delhi Capitals in the playoffs. For the second consecutive season, the Virat Kohli-led RCB have made it to the last-four stage.

It will now be a four-way battle between Punjab Kings, Kolkata Knight Riders, Mumbai Indians, and Rajasthan Royals for fourth place in the points table.

Chasing a challenging total for victory, openers KL Rahul and Mayank Agarwal came all guns blazing and gave Punjab Kings a solid start. The duo didn’t allow RCB bowlers to put pressure on them and took Punjab to 49/0 after 6 overs.

This was the 5th match in a row that RCB failed to pick a wicket in the powerplay. They haven’t been able to do it since the resumption of the IPL in the UAE.

Shahbaz Ahmed, in the 12th over of the innings, provided the much-needed breakthrough after he dismissed Rahul. The Punjab skipper scored 39 off 35 and added 91 runs for the opening stand with Mayank.

Continuing his brilliant form, Mayank then smashed his fifty in 36 balls. But, he was not getting support from the other end. Nicholas Pooran, who came to bat next, couldn’t do much and got out to Yuzvendra Chahal for only 3 runs.

Chahal, who hasn’t been named in India’s T20 World Cup squad, struck again and got the wicket of dangerous-looking Mayank Agarwal. Chahal then bowled a beautiful leg-break to dismiss Sarfaraz Khan on a duck.

After that, Sharukh Khan (16 off 11b) and Moises Henriques (12 not out off 9) hit some lusty blows but the required rate went high with every passing over at Sharjah. Punjab needed 27 runs from the last two overs and Siraj bowled an impressive penultimate over to bring down the equation to 19 runs off the final over and Harshal Patel used different variations well and defended the total for RCB.

Earlier in the day, openers Virat Kohli and Devdutt Padikkal gave Royal Challengers Bangalore a flying start. The duo played some beautiful shots and took RCB to 55/0 at the end of the powerplay.

However, during the process, Kohli was given a few lifelines by the Punjab team. In the 4th over of the innings bowled by Ravi Bishnoi, Kohli stepped out of his crease and KL Rahul missed a relatively easy stumping chance to dismiss RCB captain. Very soon, Sarfaraz Khan dropped Kohli at midwicket.

The 8th over, bowled by Ravi Bishnoi was the most eventful one when KL Rahul and Punjab Kings were left baffled after a caught-behind appeal was turned down against Devdutt Padikkal. Padikkal, who was struggling to read the leg-spinner’s googlies, went for a reverse sweep but was not able to execute the shot properly and got an under-edge.

Both Bishnoi and KL Rahul went up in appeal immediately but the on-field umpire did not give it out, forcing Rahul to go for the review. The replays showed the ball kissed Padikkal’s gloves before crashing into KL Rahul’s gloves. However, the third umpire deemed it not out and went with the on-field call, leaving Rahul and Bishnoi frustrated.

Thereafter, Punjab captain Rahul brought Moises Henriques (3/12) into the attack and he wreaked havoc. First, he dismissed Kohli (25) and then got rid of Daniel Christian in the next ball to bring Punjab back in the game. In his next over, Henriques struck again to remove a set Padikkal for 40.

After losing the wickets of Kohli, Christian, and Padikkal in quick succession, Bangalore were at 73/3 and in big trouble. But, Glenn Maxwell and AB de Villiers batted well and stitched a good partnership to bring RCB back on track.

While Maxwell was the aggressor, de Villiers batted cautiously. Continuing his brilliant form, Maxwell cleverly targeted the short boundary and hit a few big sixes to complete his fifty off just 29 balls in the 18th over. De Villiers (23 off 18) also hit Arshdeep Singh for a six in the first ball of the over, before getting out to him in the next ball.