Mumbai Indians (MI) on Tuesday cruised to their fifth Indian Premier League (IPL) title with a five-wicket win over Delhi Capitals (DC) in the final at the Dubai International Stadium. MI have become the first team in nine years to win back-to-back titles after Chennai Super Kings did it in 2010 and 2011.

Captain Rohit Sharma scored his first half-century since October 1 as MI chased down a target of 157 with nine balls to spare. 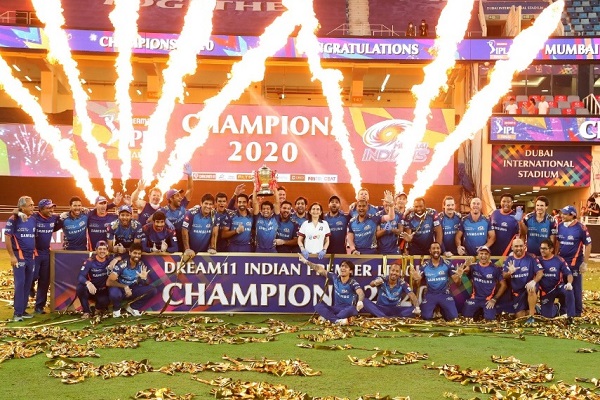 Earlier, DC recovered from losing three wickets in the first four overs to post 156/7 wickets. By contrast, MI were on top from the first over with a 45-run partnership between openers Sharma and Quinton de Kock.

But this was followed by another 45-run partnership with Suryakumar Yadav, continuing the onslaught. Sharma soon completed his 63rd T20 half-century and Suryakumar looked set to finish things off with his captain for MI. However, the latter sacrificed his wicket when Sharma ran down to the non-striker’s end. With both at one end, Suryakumar dashed off to save his captain from getting run out.

Sharma eventually fell for 68 off 51 deliveries. MI lost three wickets towards the end but it was too late for Delhi Capitals.

After losing their first three wickets within the first six overs, DC were brought back into the game with a 96-run stand between Iyer and Rishabh Pant (56) for the fourth wicket.

The partnership between Iyer and Pant was broken in the 15th over by Nathan Coulter-Nile after which Shimron Hetymer fell to Boult. Coulter-Nile then got the wicket of Axar Patel.

DC lost the in-form Marcus Stoinis off the very first ball of the match to fast bowler Trent Boult. Boult went on to dismiss Ajinkya Rahane while Shikhar Dhawan fell to Jayant Yadav, who was brought into the team in place of Rahul Chahar.

Boult was the highest wicket-taker for MI with three scalps while Coulter-Nile and Yadav got two and one respectively. Jasprit Bumrah finished wicketless.