Big blow for Royal Challengers Bangalore as their prime opener and inform batsman KL Rahul has been ruled out from the 10th edition of Indian Premier League starting from April 5. Due to shoulder injury, Rahul will not be available for the 2017 IPL and will fly to England next week to have an operation of shoulder which was injured during Border-Gavaskar series few days back. 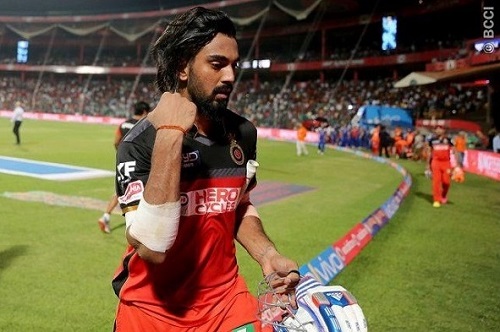 A reliable source from RCB camp has confirmed that Wicket-keeper batsman will travel to England next week to undergo surgery. He also mentioned that team would miss his services as he’s one of the key players in the Bangalore side.

“Rahul is a key player for us but he’s not fit to play due to his shoulder pain. He’s struggling to play to his full which we already saw during the test series. Hence ‘Rahul to miss IPL-10’ so as we.” the source quoted.

KL Rahul was fabulous during Australia’s tour of India 2017 as he smashed 393 runs that includes 6 fifties which were the most by any player in the series. He was the second leading run scorer for Indian team after Cheteshwar Pujara.

Rahul’s exclusion from season is a major blow for Royal Challengers as their skipper Virat Kohli is already out from the starting few weeks of tournament as he is recovering from shoulder injury. RCB to play opening match of IPL 2017 against Sunrisers Hyderabad on 5th April at Rajiv Gandhi stadium.

However when we asked about Rahul’s replacement, the official didn’t make a keen remark about it. Still he said the team management will take decision about it as soon as possible. Twenty20Wiki has learnt that Irfan Pathan could be perfect replace of Rahul in RCB roster as Pathan is capable of batting at the top order as well as he provides team a solid bowling option.

Irfan Pathan can be lucky charm for Royal Challengers as he is a good swing bowler and if we look at RCB team, we find that team is not having good Indian bowlers. Hence Pathan will be perfect replacement of Rahul and AB De Villiers can do wicket-keeping as well.