Title defenders Mumbai Indians are quite disappointed with their batting performance as batsmen have been failing to score runs from last two matches. MI have lost 3 games in the tournament so far played out of four matches. While Royal Challengers Bangalore were defeated in the previous match after scoring 190+ runs. RCB have got 50-50 ratio in played two games till now in Vivo IPL 2016.

Rohit Sharma & Company is known to comeback from behind and perform better in the latter stage of competition but they way team is looking right now, it indicates that they are not having confidence of doing something extraordinary which is required to do. Mumbai Indians are still looking for right combination in this season. Their bowling is quite impressive and if batsmen don’t put runs on the board, bowlers would not be able to defend it. 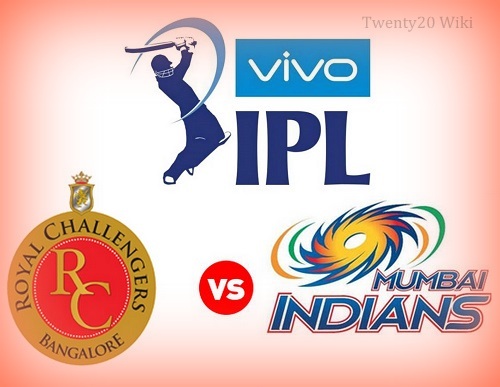 Martin Guptill, Rohit Sharma and Jos Buttler have to take responsibility to score runs at the top. Meanwhile team will also rely on Parthiv Patel, Ambati Rayudu, Hardik Pandya and Kruna Pandya to score runs in the middle overs and final overs to go after against RCB bowlers.

On the other hand, Royal Challengers Bangalore have been playing terrific in the ninth edition of IPL so far and their batting is sensational just like previous seasons. Skipper Virat Kohli is in dream form from past 1-2 year so. He and AB De Villiers have smashed two half centuries each till now while Chris Gayle still not fired in Indian Premier League 2016.

Royal Challengers Bangalore are favorites to win and they have got 60 percent winning chances over Mumbai Indians in the 14th game of Indian Premier League 9th edition on 20 April.