New Zealand cricket team have become first team to qualify for semi-final in 2016 twenty20 world cup. They registered successive third win in the tournament against Pakistan which lead Kiwis to get into the knockout stage of championship. New Zealand beat Pakistan by 22 runs in this wt20 match played at Mohali’s PCA stadium. 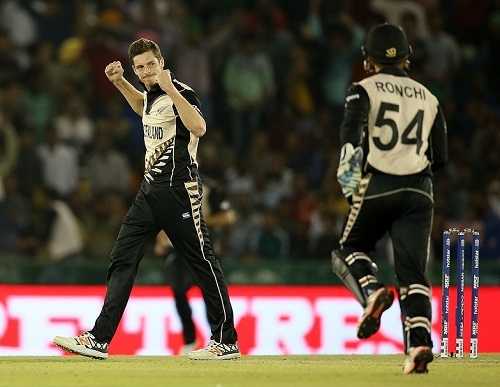 It was crucial match for Pakistan as they lost and won 1-1 match in played two games in the event and this was the match to stay alive in the sixth edition of ICC World T20. But Pakistan couldn’t make it and they lost it by 22 runs and will now play their last game against Australia on 25 March.

New Zealand was just one win away to make it into the semis and they have beaten Pakistan easily. In this match they won toss and chose to bat first. It was brilliant start for them and opener Martin Guptill smashed half century to lead Blackcaps to post 180 runs on the scoreboard in 20 overs. Guptill made 80 runs in 48 balls with the help of 3 sixes and 10 fours.

In the chase of 181 runs target, Pakistan had excellent chase and they made 66 runs in 6 overs for the loss of only 1 wicket. Opener Sharjeel Khan played 47 runs blasting innings to show chase path to Men in Green. But again Pakistan repeated their past mistakes and lost wickets at regular intervals. At the end, Pak managed to score 158 runs in reply to 180 and lost the game by 22 runs.