The winning momentum that Royal Challengers have got, will look to carry forward against Kings XI Punjab in the 50th match of ninth Vivo Indian Premier League championship on Wednesday 18th May. Royal Challengers are now heading towards to playoffs and they must be looking to win against Punjab to make themselves closer to knockouts. KXIP will play for their pride and try to test players a bit for the next season.

Royal Challengers Bangalore are in splendid form and they have been winning one after another. Their batsmen are in prime form, especially Virat Kohli and AB De Villiers who are beating opposition from their own batting. Both batsmen scored terrific hundreds against Gujarat Lions to take big win of 144 runs and in the last match against Kolkata Knight Riders, they smashed fifties to chase down 183 runs target easily. 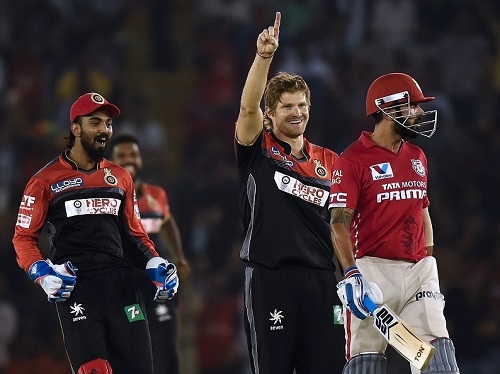 RCB beat KKR quite easily on their home ground which really be a memorable win for Kohli & Company. Chris Gayle also returned to his form in the previous match in which he scored 49 runs in which 4 big sixes were included. So now Bangalore’s batting looks more dangerous and aggressive. KL Rahul and Shane Watson are in already good form whereas Sachin baby has also played some crucial innings in the competition.

On the other hand, things come late for Kings XI as Hashim Amla’s inclusion in the side has really worked well in the batting line-up. In the last match, he missed his century but the way he played in that game it was incredible. Murali Vijay may give chances to some other players to play against RCB. Players sitting on bench may get chance in Wednesday’s clash.

Score: Bengaluru’s M. Chinnaswamy stadium is a batsman paradise wicket and high scoring games are played here. Hence we can expect big scores when teams take on each other. The projected average score on this pitch is 190 for first inning.

Win chances: Royal Challengers Bangalore will be hot favorites to win against Kings XI Punjab and they have got 60 percent winning chances in the 50th game of Vivo Indian Premier League.