Winning their first two matches in the competition, both Sri Lanka and West Indies cricket teams will be looking to register second win in the sixth edition of t20 world cup on 20th March. 2012 ICC World Twenty20 champions and 2014 wt20 winners will be up against each other today at Bangalore’s M. Chinnaswamy Stadium from 7:30 PM local time.

Two unpredictable teams will meet in a crunch match and this time both Sri Lanka and West Indies are highly relying on their batting line-ups. For Sri-Lanka, opener Tillkaratne Dilshan played the match winning knock in previous match whereas destructive opener Chris Gayle stormed hundred against England to chase big total at Wankhede Stadium.

Chris Gayle is in tremendous form and single handedly he won match for Caribbean team against England. It was hit second century in T20Is and will look to play just like that on this known Bengaluru’s pitch. In IPL, Gayle plays for RCB whose home ground is M Chinnaswamy stadium. Marlon Samuels is also in good touch the way he batted in last game.

The major concern with West Indies’ side is that they are not having match winning bowlers. Taylor, Brathwaite and Silieman Benn need to bowl well against title defenders especially versus Tillakaratne Dilshan who is in great form. Dilshan scored unbeaten half-century against Afghanistan that secured a comfortable win for them. 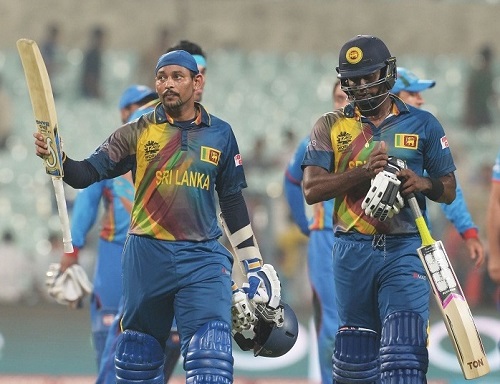 Sri Lankan batting also depends on how middle order performs. Thirimanne, Kulasekara, Kapugedara and Chandimal have to score runs today as West Indies’ chased 183 runs target easily in last match. So Sri-Lanka should score about 180-190 runs on this batting friendly wicket of Bengaluru.

Thought both teams are strong but it seems West Indies are much better than Lankan team and as per our predictions, West Indies have got 60 percent winning chances over Sri Lanka.

The pitch of M Chinnaswamy Stadium always support batsmen and we can expect a high scoring match tonight. The expected score for this match is between 170 and 180.