Visitors St. Kitts & Nevis Patriots are having 100% win record in this CPLT20 season in played 2 games meanwhile hosts St. Lucia Stars have got 100% lose record as they have lost 3 games in a row this Caribbean Premier League 2017. So the either team’s jinx gonna be broken tonight and it will be interesting to watch out how players respond on a tough batting surface.

Difficult time for two time ICC World T20 winning captain Darren Sammy as his side Saint Lucia Stars have lost 3 matches in the league so far. And it is not easy for the team to comeback. However Stars have got some top class players in the roster who can turn around the result in their favor at any instant of the match. 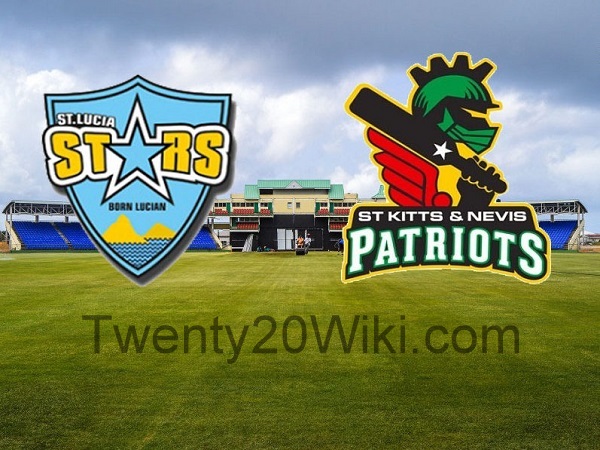 Jesse Ryder, Mitchell McClenaghan, Shane Watson, Kamran Akmal, Andre Fletcher are some of the pillars in St. Lucia team. These players need to stand and perform for the side, otherwise Stars would be out from semi-finals context in 2-3 more games.

On the other side, Chris Gayle’s St. Kitts and Nevis Patriots have played tremendous cricket in this CPLT20 2017 season. Carter, Gayle, Hafeez, Thomas, Nabi, Lewis, Joseph have been the key stars in Patriots roster. Hasan Ali has bowled really well in the league so far.

Darren Sammy International Stadium’s pitch looks like a batting paradise wicket for this 10th match of Hero CPL 2017. And we can expect some hard hitting from the batsmen all over the park. The projected score is 160 around while team batting first on this St. Lucia wicket.

Hosts St. Lucia Stars are looking much better side than St. Kitts and Nevis Patriots. As per our predictions, STS. have got 60 percent wining chances over Patriots.