Ireland stunned the West Indies to power into the Twenty20 World Cup Super 12 on Friday and send the two-time champions crashing out, with Zimbabwe joining them in the next round after edging past Scotland.

Sri Lanka and the Netherlands had already progressed from the other preliminary group to join the big guns including defending champions Australia, who open their tournament against New Zealand on Saturday. 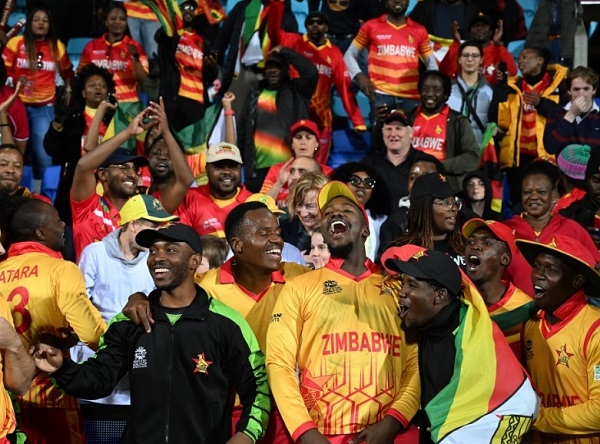 Disciplined bowling from the Irish restricted the West Indies to 146-5 in Hobart, with Gareth Delany taking a career-best 3-16 before they romped to the target with nine wickets and 15 balls to spare.

Opener Paul Stirling, at his seventh World Cup, ended on an unbeaten 66 while Andy Balbirnie made 37.

It snapped a 13-year drought of failing to make round two, having reached it once previously in 2009.

Zimbabwe are in round two for the first time on their sixth attempt after they beat Scotland by five wickets with skipper Craig Ervine hitting a half-century and Tendai Chatara taking 2-14.

They limited the Scots to 132-6 with tidy bowling before rattling through the run chase with nine balls to spare.

“It means everything. We had a disappointing loss last year at the same stage,” said Ireland skipper Balbirnie, who shared in a blistering 73-run opening stand with Stirling.

“Losing the first game and then coming back and beating a two-time champion in a must-win game… just couldn’t be prouder. Pretty emotional finish to the game.”

But it was a disaster for the West Indies, who won the tournament in 2012 and 2016 but came to Australia with a new-look team after the likes of Chris Gayle, Dwayne Bravo and Kieron Pollard retired, and Andre Russell was overlooked.

“This is a learning experience for us. We have disappointed our fans and ourselves. It’s definitely hurting,” said West Indies skipper Nicholas Pooran

After the West Indies won the toss and batted, the Irish bowlers sent down nine dot balls among their first 15.

In frustration, Kyle Mayers launched at a delivery from Barry McCarthy and was caught for one.

The dangerous Johnson Charles slammed 4-4-6 off Curtis Campher but his luck soon ran out, gone for 24.

Brandon King crunched four boundaries to steer the West Indies to 67-2 at halfway.

In reply, Ireland got off to a cracking start with Stirling and Balbirnie blazing 54 off the first five overs.

Balbirnie fell to the spin of Akeal Hosein, but Stirling, in his 177th international, kept going and with Lorcan Tucker (45 not out) saw them home.

In the later game, Scotland batted first but lost Michael Jones in the first over.

Opener George Munsey gave them hope with his ninth T20 half-century, but their 132-6 was always reachable.

Zimbabwe started with a four but then lost two wickets in eight balls.

After smacking the boundary, Regis Chakabva was trapped lbw by Brad Wheal and then Madhevere departed without scoring.

Sean Williams put on 35 with Ervine, but the stand was broken when Michael Leask came into the attack and he was caught by Wheal for seven.

Ervine kept his focus to notch a ninth T20 half-century, happy to play second fiddle to Sikandar Raza (40 off 23) who swung the bat before he was caught behind.

When Ervine was out they needed 14 off the last three overs, with Chris Greaves and Davey accomplishing the feat.

“I don’t think anyone could explain what it means. We’ve had the whole country behind us,” said Ervine. “The cricket we’ve played coming into the tournament has been special, so credit to the boys. ”

Previous: India vs New Zealand warm-up match called off due to rain
Next: Kohli stars India victory over Pakistan in T20 world cup 2022