The second Twenty20 international of 2016 India’s tour of Zimbabwe is set to play on 20th June at Harare Cricket stadium. Home team will be eyeing to seal the series with a win in this 2nd T20I game as they beaten Men in Blue on the last ball of first match on Saturday.

After white washing Zimbabwe in the ODI series, Indian team never thought of that they would face defeat in the opening match of T20 series. The way visitors played and skipper MS Dhoni led the side, it showed that India took Zimbabwe lightly in the first game. Meanwhile it was a close match and result decided on the last ball of the game. 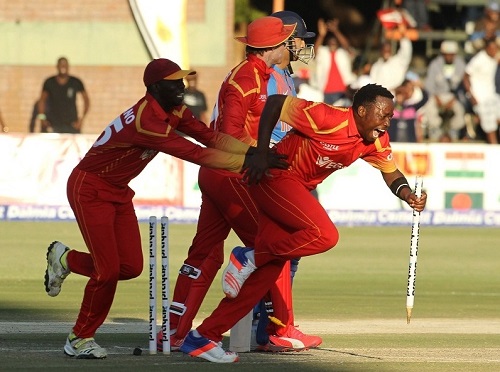 In the last over of match, India just needed 8 runs and MS Dhoni was on the crease. But this time finisher couldn’t finish off things in the right manner. Hence team lost the game by 2 runs. After the loss, in post match presentation captain Dhoni mentioned that it was batsmen fault and young players need to take responsibility and don’t throw wicket on crucial moments.

He said, “You have to take it in a serious manner because whenever you will represent the country, whenever they get a chance to be part of the proper Indian team for a consistent period of time, they will feel the pressure. That will be the time when a game like this or a tour like this will really help them ease out that pressure.”

On the other side, Zimbabwean side will be looking to repeat their first T20 match performance on Monday. They will be depending a lot on their middle-lower batsman Elton Chigumbura who smashed match winning 54 runs in 26 balls to lead the side to 170 score in the previous game.

Indian team will be favorite to win the second 20-20 and level the series. Zimbabwe can trouble to Men in Blue once again but this time India will definitely be aware of the mistakes they made in the last game. India has got 70 percent winning chances over Zimbabwe in Harare T20I.