Colors of Holi are flying all over the cricket stadiums in India as the biggest sporting event. ICC World Twenty20 has begun and super 10 teams are going to play against each other from 15th March to become wt20 champions. Afghanistan and Bangladesh have played qualifying first round in the competition to make their way for second stage whereas top cricketing teams India, Australia, Pakistan, South Africa, England, West Indies, New Zealand and Sri Lanka are placed.

Hosts India are going to take on New Zealand in the world t20 opener on Tuesday in Nagpur. Sri-Lanka is the title defending champion in this wt20. Let’s have a look at the squads of all 10 teams and preview about their tournament progress. 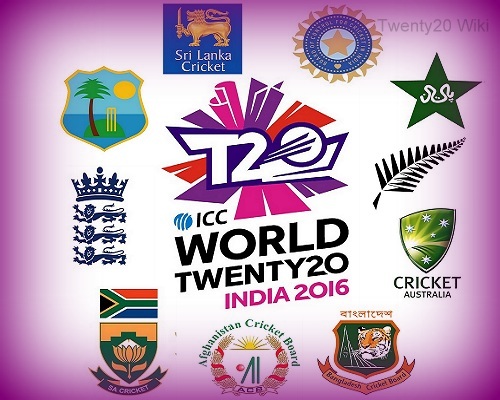 Sri-Lankan side is the title defending champion in the competition but they have to go beyond their present performance to make some impact in 2016 world t20 event. They have been struggling with the performance from past few months and need to put some serious effort to be even in the semis. Angelo Mathews will be leading the Sri-Lankan team to win championship.

SL chances: 15 percent chances to be in semi-final.

Blackcaps have been eyeing for a single ICC world championship trophy since they start playing and still searching for it. Though they have been playing competitive cricket for a long period of time and have been favorites in all International Cricket Council events but never won the event. They may break this jink as Kiwis are playing good cricket from last 2-3 years and were runner up in cricket world cup last year.

NZ chances: 30 percent chances to be in semi-final.

2010 ICC World T20 champion team England must be looking to claim second title this year. They had worst cricket world cup in 2015 where they were knockout in the first round but they have come hard to the game and won some great games over the few months. Eoin Morgan has raised the level of team and he can really lead the side towards second world twenty20 glory.

ENG chances: 30 percent chances to be in semi-final.

Indian cricket team is the hot favorite to win and the way they are playing, they should qualify for semi-final from this tough group. Inaugural world t20 champions have won 10 T20Is in played last 11 games. MS Dhoni & company will definitely be looking to give their captain one more joy and pride to nation. Men in Blue will be eyeing to create one more record of becoming first ever team to win world t20 at home.

IND chances: 30 percent chances to be in semi-final.

The most unluckiest team in ICC events is team South Africa. They have been very strong competitor over the years but never won world cup. Proteas are definitely a side to watch out in this event and are favorites to win. Faf du Plessis side has been playing good cricket in shorter format. Recently they defeated England in T20s and fought hard against Aussies in home series though lost it. AB de Villiers, Duminy, Miller, Steyn are the key players in SA roster.

SA chances: 30 percent chances to be in semi-final.

The biggest mystery and disappointing thing for Australian team is that they haven’t won single ICC World T20 trophy since it’s inception in 2007. They are 5 times cricket world cup champions but still looking for their first wt20 trophy in 2016. They played 2010 championship final and were about to win but England put their shoulder down. Steve Smith’s side is mush relying on David Warner, Finch, Maxwell, Khawaja and Watson.

AUS chances: 20 percent chances to be in semi-final.

2012 world t20 champions will not be a hot favorite to win but they are really a good side in sights of twenty20 specialists Gayle, Bravo, Sammy, Russell and Samuels. West Indies are highly depending on their captain Darren Sammy as this time he is not having so great that was in 2012. Still Caribbean team are capable enough to beat any side in the competition.

WI chances: 15 percent chances to be in semi-final.

Men in Green are the dark horses and they have been suffering a lot in all formats of the game from quite long period of time. They had a worst Micromax Asia Cup recently and New Zealand tour. Pakistan are too much depending on their bowling line up that is led by Mohammad Amir along with Mohammad Irfan, Wahab Riaz and Mohammad Sami. Shahid Afridi side needs to score runs if they really want to make impact in tough super-10 group-2.

PAK chances: 10 percent chances to be in semi-final.

Bangladesh team has been changed a lot in previous one year and Mashrafe Mortaza has really made an impact in the side as leader. The Bangladeshi Tiger is roaring very loudly and they are in good form. Bangladesh were runner up in 2016 Asia Cup and are very eager to be in the semi-finals of wt20. Tamim, Soumya, Mahmudullah, Shakib, Al-Amin and Sabbir are the key players in the side.

BAN chances: 10 percent chances to be in semi-final.

Afghanistan would have never thought to be in the super-10 but their faith and believe in themselves, has really helped them and they won all first round matches to be in the second round. Mohammad Nabi, Shenwari, Stanikzai, Noor Ali are the crucial players for Afghani team in the contest.

AFG chances: 5 percent chances to be in semi-final.

What do you think which 4 teams will perform better and go through to the semi-finals?