Australia have beaten Pakistan cricket team in the 26th match of ICC World T20 2016 and with this win, Aussies have set up virtual quarter-final against India on 27th March. Australia registered 21 runs victory against Men in Green and all-rounder James Faulkner has won the played of the match award for 5 wickets in the championship. 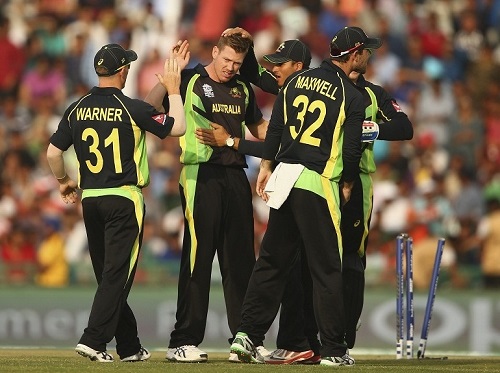 Winning the toss, Australia chose to bat first on this batting supportive Mohali pitch. Aussies got steady start but lost 3 quick wickets and were struggling on 57/3 in 8 overs. After this skipper Steve Smith and Glenn Maxwell took responsibility and started to exploit Pakistan bowling. Both added 61 runs partnership for 4th wicket before Maxwell was dismissed on 30.

Steve Smith scored brilliant half-century to lead the side towards the big total and Australia managed to score 193 runs for the loss of 4 wickets. Shane Watson also made 44 runs. In the chase of big 194 runs target, Pakistan managed to put 172 runs on the board for the loss of 8 wickets. Shoaib Malik made unbeaten 40 runs in 20 balls and Rashid Latif played 46 runs inning.

James Faulkner got two chances to get hat trick in the match but couldn’t get it. He got best bowling figures for Australia in twenty20 internationals as become first Aussie to take 5 wickets in a T20I match.