This is going to be an exciting thriller between England and Sri Lanka as both teams will look to win the match to keep their hopes alive in the competition. Currently England have won two games played out of 3 matches whereas title defending champion team Sri Lanka won only 1 match played out of two games. Hence this is the last match for English team in the group-1.

Sri Lanka and England both are ICC World Twenty20 champions and loser of Saturday’s game, probably would be out from the competition. The fact is England won’t be having anymore game after this and they have only 4 points which are as same as same South Africa right now. On the other hand Sri Lanka will have one more game after this but if they loss against England, they would go home as per the current teams standings in points table. 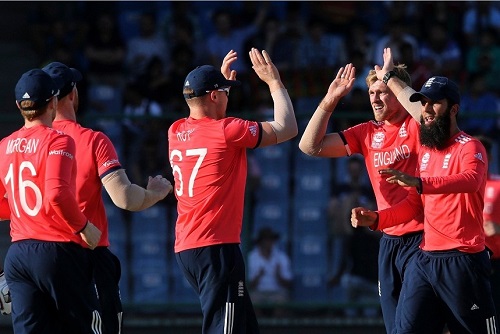 If you look at England’s performance in the last match against Afghanistan, you’ll truly said that they don’t deserve to be in semis. At one stage they were 54/7 against Afghani bowling which is not a popular bowling attack. But the way Moeen Ali played brilliant innings that match, it’s really morale booster for English team that they can rely on lower order if get stuck on any stage.

Eoin Morgan, Joe Root, Jos Buttler have to score big runs against Sri Lanka if they want to win against Lankan team. Sri Lanka is not having good bowling attack but still they have got some good youngsters who can deliver and put English batsmen on the toes. Vandersay and Herath have bowling good spin and can do damage on this Kotla’s spin friendly wicket.

As per Twenty20Wiki.com predictions, England will be favorite to win and they have got 60 percent winning chances over Sri Lanka.