If I call India vs Australia world t20 2016 match a quarter-final, nobody will oppose my words. The winner of this 30th match of wt20 will qualify for the semi-finals and become second top team from group-2. Both teams are coming from winning their previous matches as India beat Bangladesh in an exciting thriller by 1 run whereas Australia defeated Pakistan by 21 runs on this same Mohali’s PCA ground.

India were almost out from the competition when Bangladesh restricted them on 146 and almost chased it down. Once again Captain cool MS Dhoni did great job under tremendous pressure and secured 1 run win for the team. It was really a big match from point of handling pressure for youngsters like Bumrah and Pandya. 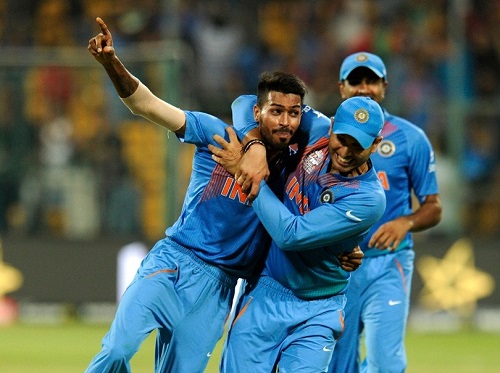 To beat Australia, India needs to raise their game as if Aussies get a chance in the game, they will never allow opposition to make comeback in the match just like Bangladesh did. Indian batsmen are disappointing a lot to team management as well as to the billions of fans. Their regular failure to score runs, is making India’s chances down to win world t20 again.

Bowling has been performing well for Men in Blue and Indian team will definitely be looking from bowlers to hit the right areas against Australia in Mohali. Aussies have already played one match on this Punjab Cricket Association’s wicket and know the conditions very well. The pitch was supporting to batting and Australian batsmen put 193 runs against Pakistan. Hence Aussie batsmen are in good touch and can seriously go after Indian bowling.

This is a tough match and as per our predictions, Indian cricket team will be favorite to win and they have got 54 percent winning chances over Australia.