Chennai Super Kings defeated Kolkata Knight Riders by 27 runs to clinch their fourth IPL title at the Dubai International Stadium here on Friday. Winning IPL 2021 completes a remarkable comeback for Chennai, who were placed seventh last season and have now won their fourth IPL trophy in a campaign that started with a loss but ended with a win. 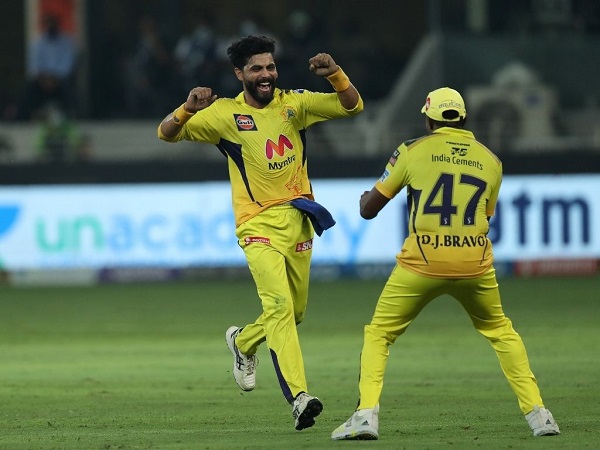 The seeds of Chennai’s commanding win were sown by Faf du Plessis, who led the way with a magnificent 86 off 59 balls apart from other batters contributing as well in scoring 192/3. The bowlers, especially two double-wicket strikes from Shardul Thakur and Ravindra Jadeja, reduced Kolkata to 165/9. It was a memorable 300th T20 match for MS Dhoni as he added another silverware to his cupboard of trophies.

Chasing 193, Shubman Gill pulled the first ball of the innings over mid-on off Deepak Chahar. Venkatesh Iyer dropped on zero, swatted Josh Hazlewood over backward square leg for a powerful six. The run-fest continued as Gill and Iyer crunched seven fours between themselves to give Kolkata an emphatic start with 55/0 in power-play.

Iyer tore into Ravindra Jadeja with two sixes before reaching his half-century in 31 balls. Gill, who survived a caught dismissal as the ball touched the Spidercam wire, hammered Jadeja for back-to-back boundaries. The 91-run opening partnership was ended by Shardul Thakur in the 11th over as Iyer holed out to long-on. After Iyer fell, Kolkata’s batting nosedived as they lost the next five wickets in the next 26 balls and scored only 29 runs.

Thakur forced Nitish Rana to chip a cross-seam delivery to mid-off. Sunil Narine’s promotion to four ended in pulling straight to deep mid-wicket off Hazlewood. Gill reached his half-century by smacking Jadeja over cover. But in the next over, Chahar took him out with a dipping slower full toss which hit him in front of the stumps while going for the ramp shot.

Dinesh Karthik opened his account by pulling Chahar over a long leg. In the next over, Karthik tried to repeat the shot against Jadeja but found a deep backward square leg. One brought two for Jadeja as Shakib Al Hasan was trapped plumb in front of the wicket.

From 120/6 in 15 overs, the result was a foregone conclusion. Rahul Tripathi (2) and Eoin Morgan (4) were dismissed cheaply in successive overs. Shivam Mavi and Lockie Ferguson struck well-timed boundaries but in the end, it was too little too late for Kolkata.

Earlier, Chennai had a flying start with 50/0 in the power-play. Ruturaj Gaikwad got off the mark by taking three boundaries off Shakib Al Hasan’s first two overs. Lockie Ferguson came under the attack as Gaikwad and du Plessis took 12 runs off him. Du Plessis then took a boundary against Shivam Mavi and Varun Chakravarthy to match with Gaikwad’s pace.

Post timeout, the opening stand of 61 runs was broken by Narine as Gaikwad (32), who also became the Orange cap holder, holed out to long-off. Du Plessis broke the spell of 17 singles by carting Al Hasan over long-off before Robin Uthappa slammed him over deep mid-wicket for the second six of the over.

Du Plessis, who survived a stumping chance at two, slammed Ferguson for back-to-back fours before ending the over with a six over long-off to reach his half-century in 35 balls. Uthappa (31) made full use of a reprieve from Sunil Narine to slam Chakravarthy followed by Narine for sixes. But Narine had the last laugh as Uthappa’s attempt to reverse sweep ended in a plumb lbw decision.

Moeen Ali took Mavi for two sixes over cow corner and down the ground to bring the 150 up for Chennai. Ferguson’s horror match continued as Ali went inside-out for a four before du Plessis smacked him for a six and four to complete 19 runs off his final over. Ali creamed Chakravarthy for a four and a six.

But Shivam Mavi conceded seven in the final over, including du Plessis holing out to long-off on the final ball, to keep Chennai ‘nder 200. But Chennai’s bowling ensured that the total was enough to clinch the trophy.

Previous: KKR to face CSK in IPL 2021 final as they beat Delhi in 2nd qualifier
Next: Scotland beat Bangladesh on the opening day of T20 World Cup 2021