Andre Russell’s century in the rain hit match, guided Tallawahs a new hope and direction in the tournament to face Warriors for the 4th time in this season. Both sides have faced each other three times and Guyana beat Jamaica on two occasions. Last time, these two teams met in the first playoff in which Sohail Tanvir smashed six in the last over to confirm Warriors victory. 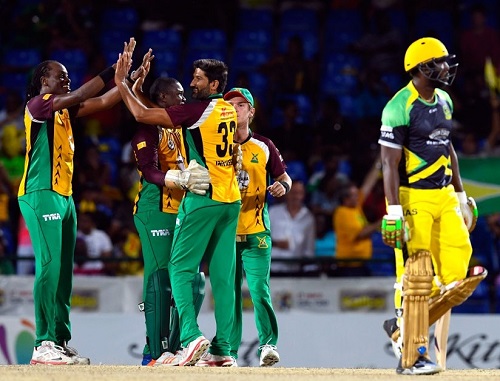 Jamaica Tallawahs must be eyeing to become first Caribbean Premier League team to win two CPLT20 trophies. They won CPL trophy in 2013 under Chris Gayle’s leadership. Hence team will be relying again on their skipper to perform well in the final and win CPL trophy for the team once again.

Tallawahs are depending a lot on their key players like Gayle, Sangakkara, Russell, Shakib Al Hasan and Chadwick Walton to score runs. Gayle and Sangakkara are the most reliable batsmen in the side. Meanwhile Guyana Amazon are relying on Dwayne Smith, Chris Lynn, HJason Mohammad and Nic Maddison.

Guyana Amazon Warriors will definitely be looking to win Caribbean Premier League trophy this time as they played 2013 and 2014 CPL finals but still finding their first cup. So it will be interesting to watch out how Guyana team plays on Sunday and win championship.

Current form clearly suggests that Guyana Amazon Warriors will be hot favorite to win against Jamaica Tallawahs. As per our predictions, Guyana Amazon has got 55 percent winning chances over Jamaica in the CPL 2016 final.