England cricket team has defeated New Zealand in the first semi-final of ICC World T20 to qualify for final. This is the second occasion when England reached to the wt20 final by beating Kiwis. English team registered 7 wickets victory to entered world t20 final which will be either against India or West Indies on 3 April at Eden Gardens. (Check: England vs New Zealand semi-final scorecard) 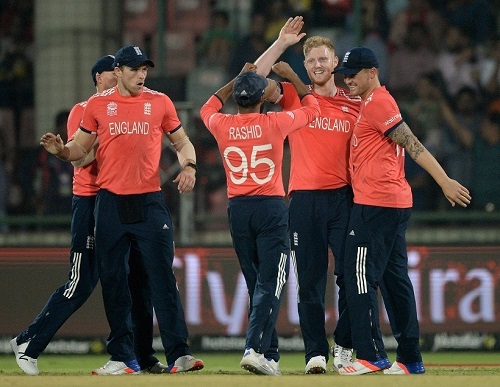 Winning the toss in a crucial semi-final, England skipper Eoin Morgan chose to bowl first. New Zealand had great start as they posted 90 runs in the first 10 overs for the loss of 1 wicket. But after that Kiwis batting collapsed and they scored just 63 odd runs in the last ten overs. English bowlers bowled very well and restricted New Zealand to 153 runs total in 20 overs.

In the chase of 154 run target, England chased the total easily with the help of opening batsman Jason Roy’s excellent half-century. He made 78 runs in 44 balls with the help of 11 fours and 2 sixes. England chased down target in just 17.1 overs and win the semi-final by 7 wickets. England have reached to the ICC World T20 final for the 2nd time. They played 2010 semi-final and won it and later on win the championship.