England cricket team have defeated title reigning champions Sri Lanka in the group-1 match of 2016 ICC WT20 to qualify for the semi-finals. England registered 10 runs victory over Sri Lanka to enter twenty20 world cup semi-final for the second time. As per the projections, England will now play New Zealand in the first semi-final of tournament on 30 March in Firoz Shah Kotla stadium, Delhi. 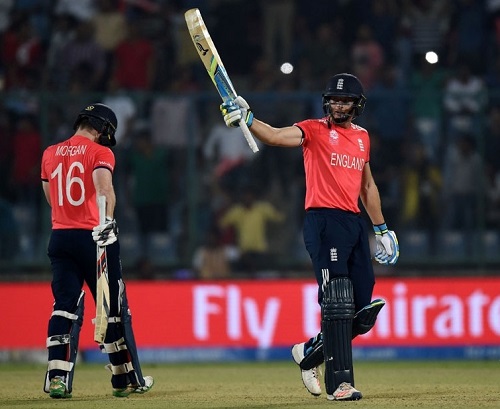 Winning the toss, Sri Lanka chose to field first. England got bad start and Hales returned to pavilion in the second over of match. After this, Roy and Root built 61 runs partnership to build a platform for upcoming batsmen to capitalize on. Joe Root and Jason Roy were dismissed in quick session and English side was struggling. But Jos Buttler and skipper Eoin Morgan played destructive innings to lead England towards 171 runs score in 20 overs. Buttler remained not out on 66 in 37 balls.

In the chase of big total in a do or die game, Sri Lanka lost 4 wickets on the score of just 15 runs. After this disastrous collapse from top order, title defending champions got some hopes from captain Angelo Mathews and all-rounder Kapugedara. Both added 80 runs for 4th wicket partnership. Pressure was too big and inexperienced Sri-Lankan batsmen couldn’t make big.

Although skipper Angelo Mathews made 73 unbeaten but couldn’t take his team towards winning total. Hence England won the match by 10 runs to qualify for wt20 semi-finals.

Previous: India vs Australia Live Streaming 2016 World T20
Next: India or Australia; Who will qualify for world t20 semi-final?