Men in Blue have defeated Australia in the second twenty20 international by 27 runs to take victorious lead in 3 match series by 2-0. This victory means a lot for Indian team as visitors lost ODI series by 4-1 and nobody was predicting that India will bead strong Australia on their home ground. Virat Kohli was awarded man of the match for the successive 2nd time as he was named MOI in 1st T20 too. 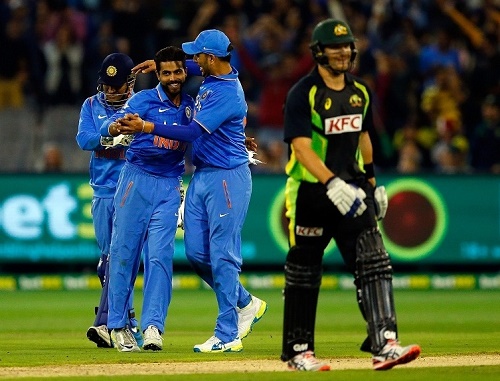 In this crucial match, Australia won toss and chose to field first. Indian openers provided solid start to team; Rohit Sharma and Shikhar Dhawan added 97 runs for first wicket in 10 overs. Dhawan was the first batsman who was dismissed in the 11th over when he was batting on 42. After this inform Virat Kohli came to bat and started to exploit Australian bowling.

Both Rohit and Virat were smashing the ball all over the park at Melbourne Cricket Ground. Rohit completed his 8th T20 international fifty in which he hit 5 fours and 2 sixes. He returned to pavilion in the 16th over of the match in when team’s total was 143.

In the chase of 185 runs target, Australia could manage to score 157 in 20 overs for the loss of 8 wickets. Captain Aaron Finch was the highest scorer for team as he made 74 runs in 48 balls but failed to take team towards winning end. Jasprit Bumrah and Ravindra Jadeja took 2-2 wickets each in Australia innings.

The final T20I of series will be played on Sunday 31 January 2016 at Sydney Cricket Ground.