India has defeated Australia in the virtual quarter-final to confirm their semi-final spot in 2016 twenty20 world cup. Player of the Match Virat Kohli made unbeaten 82 runs in 51 balls to chase down 160 runs target. With this win Men in Blue have reached to the semifinal and will face West Indies on 31 March. 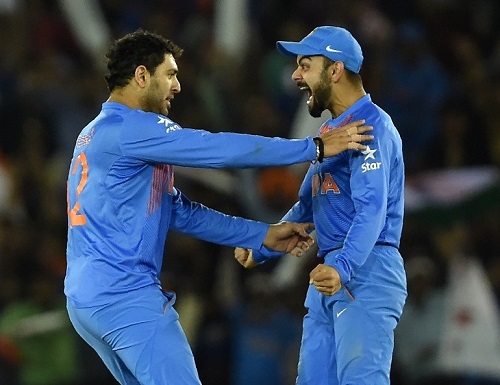 Winning the toss, Australian team chose to bat first. In this crucial match, Australia got flying start as openers added 53 runs in 4 overs. After this bowlers came back and took wickets on regular wickets. Indian team managed to restrict Australia on 160. Aaron Finch made 43 runs in this crucial inning.

In such pressure game and chase, Virat Kohli scored brilliant unbeaten 82 runs in 51 balls that helped India to chase total successfully. Home team lost three quick wickets in form of Dhawan, Rohit and Raina early in the stage. But Yuvraj Singh and Kohli built a small partnership that helped India to get base. After this Kohli and Dhoni finished off things in style.