The Third T20I match of India vs England bilateral series will be played on 1st February 2017 in Bengaluru at 7:00 PM IST. England beat India in the first twenty20 match meanwhile Men in Blue won second T20 game. Live cricket match streaming and telecast of 3rd Ind vs Eng T20 will be shown on Star Sports and Sky Sports.

Indian team had fantastic last match with ball as bowlers pulled off victory from England’s jaw. Visitors needed 27 runs from 18 balls with main batsman Joe Root was on the crease. But India’s pace battery Ashish Nehra and Jasprit Bumrah bowled brilliantly that helped home team to make comeback in the match and win thriller by 5 runs. 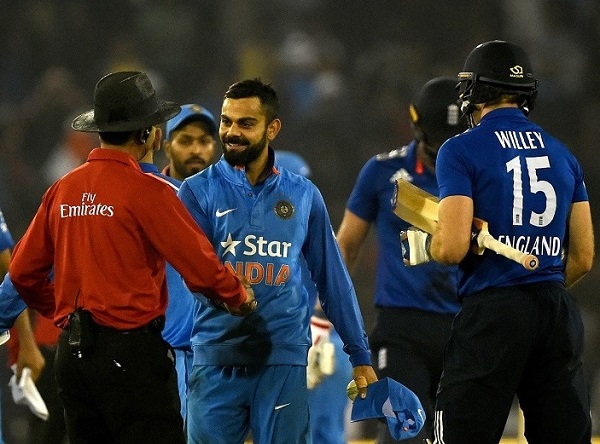 India’s biggest worry was openers performance. KL Rahul’s match winning important 71 runs knock on Nagpur’s wicket was crucial for team India. Rahul didn’t play well in ODI series and was flopped in first twenty20 international as well. So second game was very important for him too to perform and he did very well.

Virat Kohli and KL Rahul are used to M. Chinnaswamy’s pitch as both players use to open for Royal Challengers Bangalore during IPL matches. However Kohli hasn’t batted at his best in this twenty20 series but he is in good form and play some great shoots in Bangalore T20.

Indian middle order needs to fire as if we look at both t20s, India has not produced good score while batting first. Tam even failed to cross 150 run mark. So Yuvraj Singh, MS Dhoni, Suresh Raina and Hardik Pandya need to score quick and big runs in Bengalore to put pressure on Eoin Morgan’s side which is looking quite confident in the twenty20 series.

On the other side, England is laying good cricket. If umpire didn’t give Root out, the story could be other in the last T20I. English batsmen are in terrific form especially Jason Roy, Eoin Morgan, Joe Root and Sam Billings. Openers Roy and Billings give good start to the side.

All-rounder Ben Stokes is in good form. He is good with bowling at the start and then batting in the middle and depth overs of the innings. Chris Jordan is also doing great job for visitors.

It’s quite difficult to make a prediction for twenty20 match but we have to make it. And it looks like home team India will be favorites to win against England in the third T20I in Bangalore and they have got 60 percent wining chances.

The live score of India vs England 3rd t20 2017 will be provided by bcci.tv, espncricinfo.com and cricbuzz.com.