Inform Kolkata knight Riders are set to host Rising Pune Supergiants in the 45th match of ninth Vivo Indian Premier League championship on May 14, 2016. Two time IPL Champion KKR are in tremendous form and have won 6 games in played 10 matches while oune just managed to win 3 games out of 11. RPS are out from the playoffs race while Kolkata will try to earn two points to make their chances strong to be in knockouts.

Hosts Kolkata have never thought of that they would face defeat on their home ground as in previous game, Gujarat Lions beat them easily. Top order was completely destroyed on just 24 runs score in first six overs. Gujarat were on the top in that match but thanks to Shakib Al Hasan and Yusuf Pathan who took team’s total past 150 and post 158 runs challenge to Gujarat Lions. 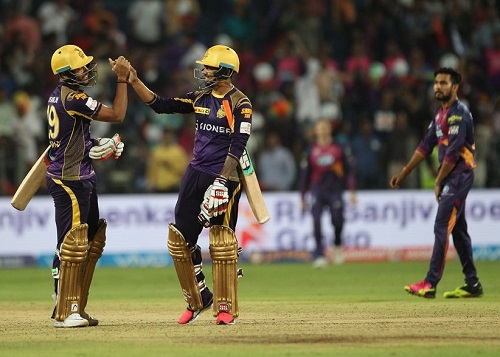 Once again these players will be crucial for KKR as against Pune Supergiants, batsmen also lacked and team managed to win the game by 2 wickets. It was Umesh Yadav’s six which sealed the win for Knight Riders. So it will be a tough challenge for Kolkata’s batsmen especially for Gambhir, Uthappa and Manish to whom team relies a lot.

There is nothing to loss for Rising Pune Supergiants and MS Dhoni in the competition anymore as they are out from the race to be in playoffs. With loss of 4 runs against RCB in a crunch game while chasing just 137 runs, RPS would definitely think about their batting and skipper Dhoni may make some changes in the batting order and even in playing XI. Irfan Pathan might be seen playing his first game on Saturday against KKR.

Score: Eden Gardens pitch is a spin supportive wicket and also favorable for batsman at times. Outfield is also fast and ball runs away to the boundary very quickly. Hence we can expect a total of 160 runs on this Kolkata’s wicket.

Win Chances: As per recent form and performances, no doubt that Kolkata Knight Riders will be favorite to win on Saturday. But Rising Pune Supergiants have got some good players who can turn around the game. Hence it will be a close contest. KKR have got 55 percent winning chances.