Royal Challengers Bangalore Skipper Virat Kohli has become first ever batsman in Indian Premier League to score three centuries in a single IPL season. He achieved this milestone in 2016 Vivo IPL match-44 against Gujarat Lions where he smashed 109 runs in 55 balls at the strike rate of 198.18. 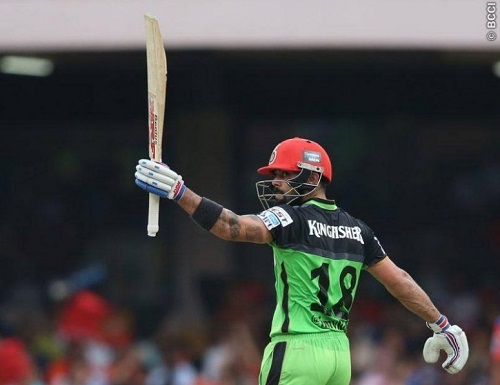 This is the second hundred for Kohli against Gujarat Lions. Before few days back, Kohli scored his first ever T20 century against Gujarat in Rajkot. The 2nd ton of season, Kohli scored against Rising Pune Supergiants. However Virat never hit ton ever before but when he picks his season, he has made it special as he scored third centuries.

In this special innings, Indian cricket team champ hit 8 sixes and 5 fours. He batted along with AB De Villiers who also hit his second ever hundred in IPL. MR. 360 degree made 129 runs in 52 balls with the help of 12 sixes and 10 fours.