The ninth edition of Vivo Indian Premier League has come to the end and the last match of season is scheduled to play on Sunday, 29th May 2016 at M. Chinnaswamy Stadium in Bengaluru. Royal Challengers Bangalore and Sunrisers Hyderabad will take on each other in the final to become champion of 2016 IPLT20 trophy.

It is going to be an exciting thriller as top two sides of cash rich IPL league, Sunrisers Hyderabad and Royal Challengers Bangalore are eyeing to win maiden Indian Premier League trophy. Eventually this is the second time when the two franchises Bangalore and Hyderabad are playing in an IPL final. In 2009 edition, both franchises met in the final but that time Hyderabad team was known as Deccan Chargers. 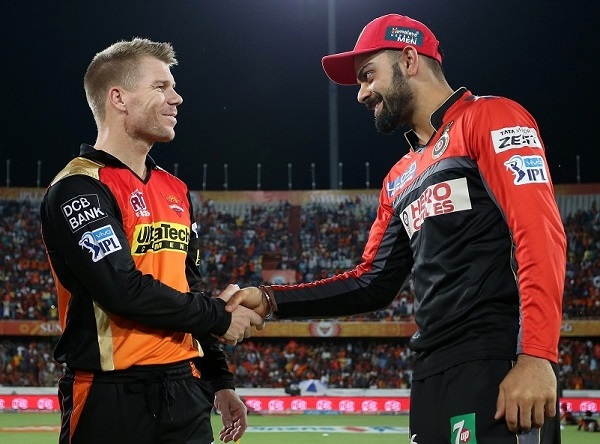 RCB qualified for final just like champions. The fact is they won successive last 7 matches to be here in the final of Vivo IPLT20 and will definitely be looking to finish the season with trophy win. The last match was real test for Royal Challengers in which Gujarat Lions dismissed 5 top RCB batsmen on 29 runs in the chase of 159 runs target. AB De Villiers played match winning knock to take the side towards final.

Captain Virat Kohli is in tremendous form and leading run scorer in the league with 919 runs which is highest ever in a single edition of IPL. Gayle, Kl Rahul have also played some of the good innings in the season and can be very valuable for RCB in the tournament winner deciding game.

On the other side, Sunrisers Hyderabad are also depending on their skipper just like RCB. David Warner is in tremendous form and he is the second highest run scorer in this season after Kohli. He played 93 runs unbeaten innings, that helped SRH to qualify for final. Shikhar Dhawan and Yuvraj Singh are also the key players in the Hyderabad batting line-up. The way Bipul Sharma played two short but match changing innings in previous knockouts, it is quite tremendous in prospects of scoring runs in the lower order.

Score: It’s a grand final of ninth Indian Premier League and M. Chinnaswamy stadium is all set to host a cracking game between top two teams of the tournament. Bengaluru’s wicket and field supports batsmen and it’s a high scoring venue. So we can hope for high scoring IPL-9 final on Sunday. The projected score is 195 on this Bangalore’s pitch.

Win Chances: Royal Challengers Bangalore are a good side, especially in their home conditions. As per our twenty20wiki.com’s predictions, RCB will be favorites to win and they have got 57 percent winning chances over Sunrisers Hyderabad in final match on 29th May.