Deepak Hooda struck a sizzling fifty while Avesh Khan and Jason Holder shared seven wickets between themselves as they helped Lucknow Super Giants defeat Sunrisers Hyderabad by 12 runs in match 12 of IPL 2022 at the D.Y Patil Stadium on Monday. 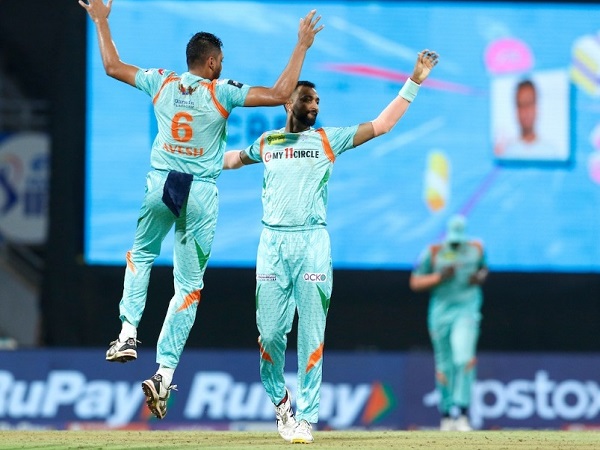 After Hooda (51 off 33 balls) and captain K.L Rahul (68 off 50 balls) hit fifties in taking Lucknow to 169/7, Avesh and Holder stopped Hyderabad from getting a move-on in power-play as well as in death overs as they were eventually restricted to 157/9 in 20 overs. The result meant Lucknow picked their second win while Hyderabad had to face their second loss of the tournament.

Hyderabad began the chase by losing openers, captain Kane Williamson and Abhishek Sharma in power-play to Avesh. While Williamson’s scoop was caught by short fine leg, Sharma sliced high off the toe-end of his bat to cover.

Rahul Tripathi kept Hyderabad in the hunt by slamming three fours off Andrew Tye in the eighth over. Tripathi placed his shots well in bisecting leg-side fielders with his pull and flick. But the standout shot from the over was him using the pace from Tye’s short ball to ramp over third man.

But Lucknow continued to pick wickets as Krunal Pandya removed Aiden Markram to break a 47-run partnership. Markram tried to go big over cover but didn’t get the elevation as fielder at cover timed his jump well to complete an overhead catch. Pandya returned for his final over to entice Tripathi into slog-sweeping straight to deep mid-wicket.

Nicholas Pooran kept Hyderabad in contention with some gutsy stroke-play in his 24-ball 34. He began by pulling Pandya over long-leg for six and slammed delightful leg-side boundaries off Holder before producing an eye-catchy drive off Bishnoi.

But Avesh tilted the scales in Lucknow’s favour by forcing Pooran to miscue to long-off on a low full toss in the 18th over. On the very next ball, Khan found a faint inside edge on a drive by Abdul Samad which was pouched by the keeper behind.

With 16 runs needed off the final over, Washington Sundar holed out to long-on off Holder. Holder followed it up by deceiving Bhuvneshwar Kumar with a slower delivery which took the leading edge high to the keeper and ended the match by having Romario Shepherd slicing to point as Hyderabad lost five wickets in the last three overs.

Earlier, Lucknow were hit with an early blow when Sundar, in his first over, forced Quinton de Kock to drive through off-side and gave an easy catch to cover. Evin Lewis couldn’t break free against Sundar via sweeps and was trapped plumb lbw on the third time after surviving an earlier appeal via umpire’s call. Manish Pandey mistimed to mid-on off Shepherd, leaving Lucknow in trouble at 27/3 in 4.5 overs.

Rahul and Hooda took some time before the duo went into break-free mode. Hooda and Rahul slammed four boundaries off tearaway pacer Umran Malik to take 20 runs off the 10th over. With Rahul dropping anchor, Hooda continued to take boundaries off Malik by slamming two fours through backward point and down the ground followed by a pulled six over fine-leg.

After Hooda raised his fifth IPL fifty with a single through long-on, Shepherd managed to deceive him with a slower delivery, which the right-handed batter miscued to deep mid-wicket. Rahul then immediately notched up his fifty and in the next over, hit back-to-back boundaries off Sundar to loot 17 runs from the 17th over with Ayush Badoni hitting a boundary too.

Rahul had a reprieve at 64 when Samad dropped a tough chance at deep cover off Bhuvneshwar. But in the next over, he was trapped lbw by a yorker from T. Natarajan while going for the sweep. Natarajan scalped his second wicket in the same over when his yorker sneaked past Pandya’s bat to hit the base of leg-stump. Badoni and Holder hit a boundary each in the final over before the former was run out on the final ball to give Hyderabad a target of 170, which they successfully defended.