Kiwis beat Sri Lanka in a close contest by 3 runs

New Zealand cricket team have defeated Sri Lanka in the first twenty20 of 2016 series. Blackcaps registered a 3 runs victory in a close contest game played at Bay Oval in Mount Maunganui. Trent Boult was awarded man of the match for his match winning bowling figures of 3/21 in 4 overs. 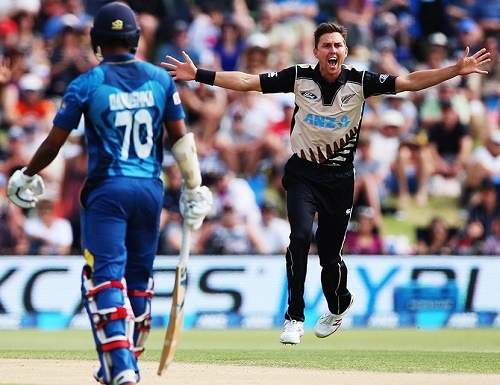 Winning this first T20I, home team leads by 1-0 in the series with final 20-20 to be played on 10 January. Sri Lanka won toss and chose to bowl first in this opening game of series. Their bowling first decision was proven wrong by Kiwi openers Martin Guptill and Kane Williamson. Both batsman built 101 runs partnership in the first 10 overs of the match.

Guptill and Williamson scored their respective fifties to provide excellent platform to middle order and lower order batsmen. Captain Kane Williamson made 53 in 42 balls whereas Martin Guptill returned pavilion after scoring 58 in 34 balls. Towards the end of innings Ross Taylor made quick firing 22 runs in 9 balls. Colin Munro also smashed 36 runs in 26 balls. NZ set a target of 183 runs for Sri Lanka in the limited 20 overs.

In the chase of this challenging total, Sri Lanka got disastrous start and team lost 4 batsmen in the powerplay overs. Opener Danushka Gunathikala was steady at one end but wickets were falling regularly from other end. He made 46 runs in 29 balls before getting dismissed. Lower order batsmen tried hard to chase the 182 runs but shorten by three runs.

Milinda Siriwardana scored made crucial 42 in 31 balls but couldn’t take team towards the winning total. Trent Boult and Matt Henry took 3-3 wickets each to guide New Zealand towards 3 runs victory.

The last and final T20 of Sri Lanka’s tour of New Zealand will be played on 10th January.