New Zealand have beaten Australia in their second match of ICC World Twenty20 2016 to register consecutive win in the championship. Kiwis won by 8 runs in the 17th match of tournament and now they are near to qualify for semi-finals as they only need win either against Pakistan or Bangladesh to make their way to make it into knockout. 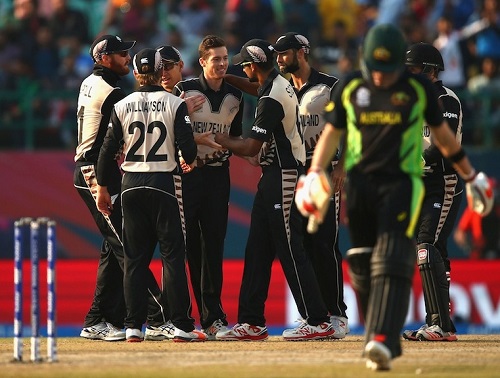 It was a close contest match between two strong contenders of wt20. Winning the toss New Zealand chose to bat and put 142 runs challenging total on the board. Martin Guptill, Collin Munro, Grant Elliott and Kane Williamson played valuable knocks to give their bowlers something to fight for.

Australia failed to chase down this total and whole team managed to score 134 runs in 20 overs for the loss of 9 wickets. At one stage they were looking great in the chase in the early 6-7 overs of the match but all in sudden, Aussies lost wickets in quick session. And at the end they shortened the score by 8 runs.

Player of the match: Mitchell McClenaghan