England cricket team have created history as they have chased down the highest total of ICC World Twenty20. English men chased 229 runs target against South Africa in the 18th match of 2016 t20 world cup played at Mumbai’s Wankhede Stadium. Previously the highest successful run chase was 208 which was chased by South Africa against West Indies in 2007 world t20.

This run chase is also become the second highest ever run chase in Twenty20 International Cricket. Moeen Ali hit the winning run for England in the dramatic final over. England won this match by 2 wickets with 2 balls remaining in the innings. 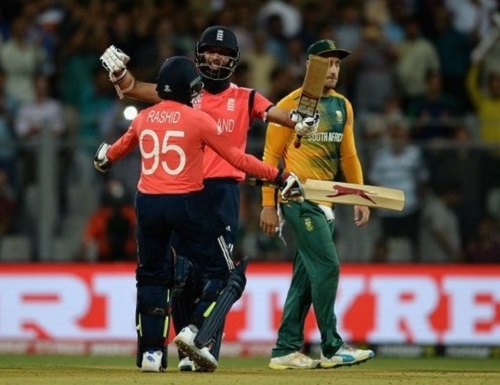 Joe Root was the hero for England and he smashed match winning 83 runs in 44 balls with the help of 4 sixes and 4 fours. Before him, opener Jason Roy hit 43 runs in 16 balls to give momentum to English side in this chase of 230 runs target. In first two overs of the chase, England made 44 runs that inspired them to run after the biggest ever chase in T20 world cup history.

In this crucial match, England won toss and asked South Africa to set target for them. Proteas were playing their first match of the championship and they played really well and scored excellent 229 runs in 20 overs. Hashim Amla and Quinton de Kock played brilliant innings and smashed individual fifties to set the tone for big total. Towards the end of innings JP Duminy also hit half-century that helped SA to put a big total on the scoreboard.

England chased down this total successfully in 19.4 overs. After the win English skipper Eoin Morgan said, “I thought we would have to bat out of our skins to chase that [230] down, and we did.”