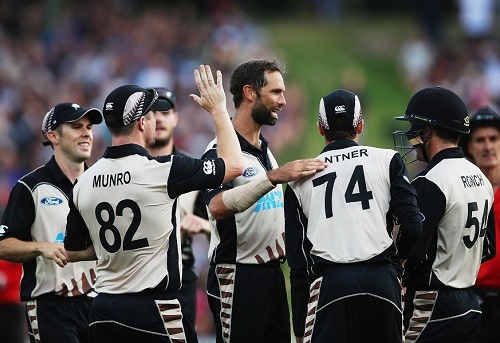 Coach Mike Hesson said, “With the Indian conditions in mind, the plan has always been to take three front-line spinners and all three bring something different. It’s great to have Nathan available again and his experience in the foreign conditions will be invaluable — both he and Mitch Santner have the ability to bowl in the first six overs, which gives Kane a number of options to work with.”

Ross Taylor, Tim Southee and Mitchell McClenaghan are not currently fit to play the matches but are expected to get fully fit for the prestigious event in India. Team is having brilliant bowling line-up insights of Trent Boult, Adam Milne and all-rounders Grant Elliott and Corey Anderson will play crucial role for Kiwis in the championship.

Batting has been superb for the team as top border batsmen like Kane Williamson, Martin Guptill, Colin Munro and Luke Ronchi have been scoring so good for the side in recent series’ against Sri Lanka and Pakistan at home. Colin Munro will be one of the key players for team in middle order.

Henry Nicholls is the luckiest player who hasn’t made debut for national team and is featured in the final New Zealand squad for World Twenty20 2016. He only played 7 One-Day internationals.

Let’s have a look at the full 15-men roster of Kiwis for world cup.

Kiwi team is placed in the group 2 of Super-10 stage in sixth edition of T20 cricket world cup which is beginning from 8th March. New Zealand will face hosts India in the opening match of tournament on 15 March 2016 in Nagpur. Team will also play Australia, Pakistan and one qualifying team from first round of championship.