One of the India’s great batting legends Sunil Gavaskar feels India should go with Yuvraj Singh in T20 cricket world cup 2016 and must be a part of playing XI in the competition. In an interview with leading news portal NDTV veteran cricketer told that Yuvraj’s batting, bowling and fielding capabilities with years of experience will surely help Men in Blue in the 6th ICC Wt20. 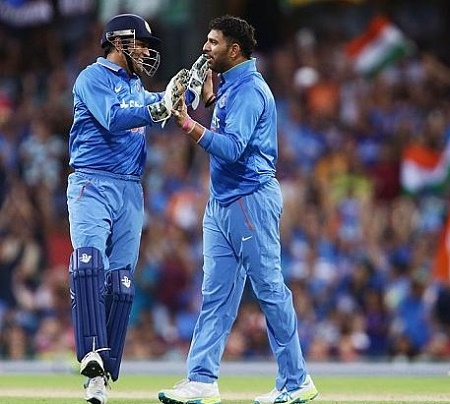 Gavaskar told NDTV, “Yuvraj gets wickets in Australia. On the sub-continent, he has to be part of the eleven. Yuvraj has not lost his power. He is a plus. India must be patient with him. When Yuvraj got going, he delivered. We have done a bit of Swachh Australia.”

Yuvraj Singh made match winning 15 runs in the third twenty20 international match against Australia which helped India to create history and became first country to clean sweep Australia in their home. Yuvi took 1 wicket in that match and smashed 1 six and 1 four in the final over of match in which India was required 17 runs to win series by 3-0 at SCG.

Suresh Raina and Yuvraj Singh kept their nervousness calm and guided team towards big chase of 199 in 20th over. Left handed Raina made crucial 49 runs in that Sydney T20I game. With that 7 wickets victory, India also got top place in the latest ICC T20 rankings. Raina smashed the four on the last ball of match to finish of things. So Mr. Gavaskar thinks Suresh Raina is one of the best readers of fastest format of game.

“In Twenty20s, there are no better readers of the format than Suresh Raina. The way Suresh Raina and Yuvraj Singh held their nerve is commendable. The balance of the team is good. The Sydney win was big. Chasing 200 is never easy,” Gavaskar added.

Indian cricket team is scheduled to meet top cricketing nations like Pakistan, New Zealand and Australia in the group fixtures of world twenty20 2016 championship starting from 8th March in India.