Rajat Patidar produced a knock for the ages, slamming a 49-ball century while Josh Hazlewood picked three wickets in powering Royal Challengers Bangalore to Qualifier 2 of IPL 2022, defeating Lucknow Super Giants by 14 runs in the Eliminator at the Eden Gardens on Wednesday. 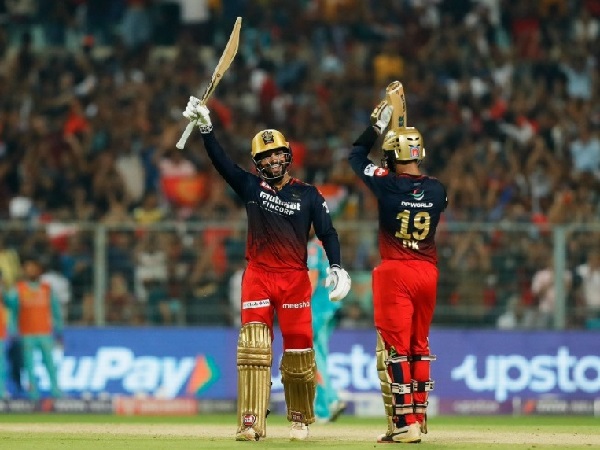 After rain delayed proceedings by an hour and ten minutes, Patidar slammed 12 boundaries and seven sixes for scoring an unbeaten 112 off just 54 balls, taking Lucknow’s bowling attack to cleaners. Patidar was brutal in the last five overs, which brought a whopping 84 runs with Dinesh Karthik provided finishing fireworks in an unconquered 37 as Bangalore posted a mammoth 207/4.

In reply, Lucknow were kept in the hunt, thanks to a 96-run stand between KL Rahul (79 off 58 balls) and Deepak Hooda (45 off 26 balls). But with Hazlewood making three strikes and Harshal Patel conceding just 1/25 in his four overs apart from superb fielding display, Lucknow could make only 193/6. The win means that Bangalore will face Rajasthan Royals in Qualifier 2 at Ahmedabad on Friday.

After Quinton de Kock and Manan Vohra fell without making much impact, Rahul opened up by taking two sixes and a boundary off Siraj in the final over of power-play. With Hooda playing some shots and fetching boundaries, Lucknow were kept in the hunt. But Bangalore succeeded in containing the run-flow and with some sharp fielding, especially from Wanindu Hasaranga on the third ball of tenth over.

With 99 needed off last seven overs, Rahul smacked Hazlewood for six over deep midwicket to bring up his fifty in 43 balls. Hooda also hit Hazlewood for a six over long-on before clubbing Hasaranga for a brace of sixes over the same region. But the leg-spinner had the last laugh, going past Hooda’s attempted slog-sweep to rattle the stumps.

Marcus Stoinis ended the over by slog-sweeping Hasaranga over wide long-on for third six of the over. In the leg-spinner’s next over, Rahul shuffled across to slog-sweep Hasaranga for a six over fine leg followed by another sweep for a boundary through the same region.

But Bangalore bounced back by having Stoinis caught at deep cover off Patel, who conceded just eight runs despite leaking six runs in the start as extras. Hazlewood produced the knockout punch in the 19th over when Rahul moved across to scoop, only to be caught by a leaping fine leg and followed it up by catching Krunal Pandya for a golden duck off his own bowling, enough to seal the match in Bangalore’s favour as Rahul’s late acceleration went in vain.

Earlier, Patidar, who was not even picked at the mega auction and came in mid-way as an injury replacement for Luvinth Sisodia, played every role in the book for enthralling the capacity crowd with a breath-taking knock. He came in when the ball was new, waited for some time and then unleashed an onslaught equally against pace and spin to enthrall a capacity crowd at Eden Gardens, who will be remembering his knock for a long time to come.

After Mohsin Khan provided the early breakthrough by dismissing Faf du Plessis for a golden duck and luring the right-hander to nick one behind to keeper Quinton de Kock, Patidar got going with an upper cut over point off Avesh Khan and then hammered a harmless short ball with a pull over midwicket for back-to-back boundaries.

Pandya came under thrashing from Patidar in final over of power-play, hitting three boundaries and a six to take 20 runs off the over and bring up Bangalore’s fifty. With Patidar going fast and furious, he losing support from other end as Virat Kohli, Glenn Maxwell and Mahipal Lomror fell quickly in the middle overs.

But he continued to be on a roll, bringing his fifty in 28 balls. It was a period where Bangalore benefitted from reprieves given by Lucknow, starting from Rahul dropping Dinesh Karthik at four and Hooda dropping Patidar at 72. That set the tone for Patidar to unleash a carnage on Ravi Bishnoi, whacking three sixes and two boundaries from wide long-off to deep mid-wicket as the 16th over yielded 27 runs.

After Karthik took three boundaries off Avesh in the 17th over, Patidar was again dropped, this time on 93 by Vohra and on the very next ball, pulled over deep mid-wicket for six to bring up a sensational century in 49 balls. Karthik and Patidar smacked 21 and 13 runs off the last two overs to help Bangalore cross 200-mark, which was just enough in the end.