The 17th match of Vivo Indian Premier League 2017 is going to be played between Rising Pune Supergiants and Royal Challengers Bangalore on 16th April in Bengaluru. Both teams have got similar record in the tournament so far as both teams have won just 1-1 matches in played 4 matches each side.

Visitors Rising Pune Supergiant have lost three matches in the league sofar but still they can make comeback in the tournament as they are having good players in the side. Rahane, du Plessis, Dhoni and Stokes need to score runs quick to post good total on the board. The fact is Royal Challengers are having strong batting line-up, RPS should score big runs. 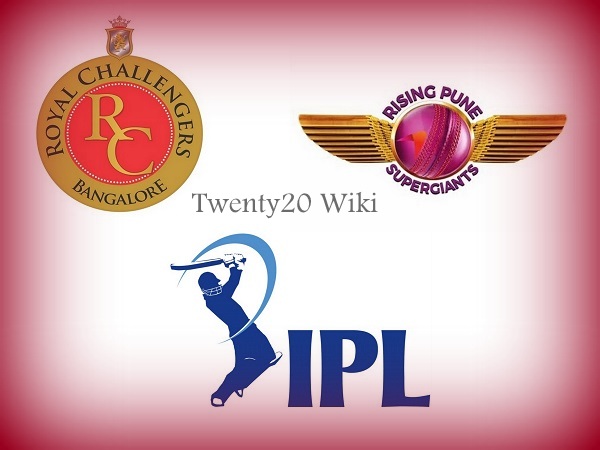 On the other hand, Royal Challengers Bangalore are struggling with their bowling line-up just like previous seasons. Virat Kohli and AB De Villiers have been doing great and scoring runs for the side. But still bowlers have been failing to deliver at the right moment and picking up wickets.

In the last match against Mumbai Indians, team once dismissed 4 wickets on just 7 runs after posting 142 on the scoreboard. Then tam lost the match due to not having good bowlers apart from Samuel Badree, Mills and Chahal. Tymal Mills is not effecting in the season and team management can replace him with Shane Watson to strong batting as well.

Royal Challengers Bangalore are favorites to win against Rising Pune Supergiants and they have got 60 percent winning chances in the 17th game of Indian Premier League 2017.

M. Chinnaswamy stadium pitch is not good in the season which we had experienced in previous IPL editions. Bowlers are enjoying on this wicket and batsmen are struggling. So can expect 160-170 runs while team batting first.