Struggling Rising Pune Supergiants to take on Sunrisers Hyderabad in the match-22 of Vivo Indian Premier League twenty20 on 26th April at Rajiv Gandhi International Stadium in Hyderabad. The match has been scheduled to kicks off at 8:00 PM as per local time, 2:30 PM GMT and 3:30 PM BST.

MS Dhoni was not in such situation ever before in the history of IPLT20 as a skipper and player. Captaining new team Rising Pune Supergiants, he got brilliant start in the tournament with a big win over title defenders Mumbai Indians in the opening match but after that his team lost 4 successive matches and are in trouble before heading towards the second phase of group stage. 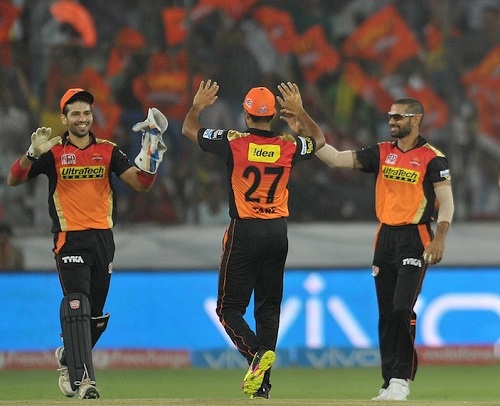 In the last match against KKR, they had chances but could not finish the game. Umesh Yadav’s six on the last ball, helped Kolkata to win the game. But if you actually looked close to the game, you would say RPS lost it because of their bad fielding effort and were quite short of 15 runs. Kevin Pietersen is already injured and won’t be available for selection. The big names in side haven’t performed as per their caliber but still hopes are alive for the camp.

Faf du Plessis, Steve Smith and MS Dhoni haven’t fired in the tournament so far. Although Ajinkya Rahane has been scoring runs but not in a way that can lead the side to post a challenging or winning score for Rising Pune Supergiants.

On the other side, Sunrisers Hyderabad are looking to get momentum and won some good 3 matches in the event. The fact is their captain leading from the front end. David Warner is a one man army for SRH. Yuvraj Singh presence is still missing in the middle order. Meanwhile Shikhar Dhawan’s bad form still continue and nobody knows when he’ll return.

Sunrisers Hyderabad will be favorites to win 22nd game of Vivo Indian Premier League 2016 on 26 April and they have got 60 percent winning chances over Rising Pune Supergiants.

India based viewers can tune to Sony ESPN, Sony SIX and Sony MAX to catch the live action on television from 20:00 IST in English and Hindi commentary. Hotstar App is a great option to watch live stream on mobiles and tablets.