Pakistan halted England with three wickets in six balls to take a sensational three-run win in the last over of the fourth Twenty20 international in Karachi on Sunday. 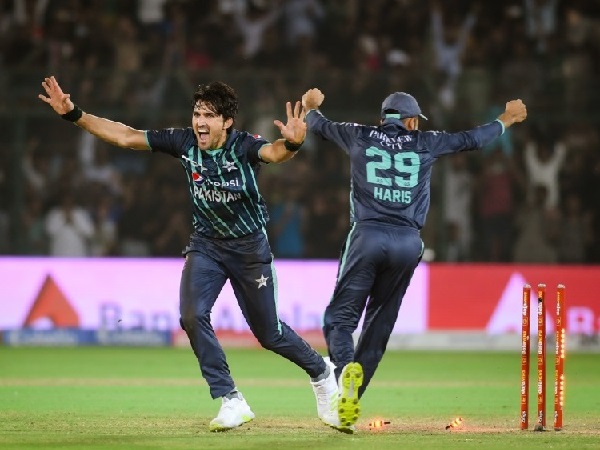 With England needing five for victory from 10 balls, Rauf dismissed Liam Dawson (34) and Olly Stone off successive deliveries in the 19th over.

Last man Reece Topley was then run out as Pakistan rescued victory from almost certain defeat at a packed National stadium in Karachi.

Dawson had silenced a 32,000 holiday crowd by cracking four fours and a six off pacer Mohammad Hasnain’s 18th over.

When Topley was run out off the second ball of the last over it sent Pakistan players and home fans into raptures.

The win made the occasion of Pakistan’s 200th T20I more memorable. They are the first team to reach the milestone.

England were rocked by Hasnain (2-40) and Nawaz (3-35) and were staring at defeat at 130-7 before Dawson added 32 with Adil Rashid (three not out) to bring England back in the game.

But Rauf’s two wickets, he finished 3-32, sealed the match for Pakistan.

The remaining matches are in Lahore (September 28, 30 and October 2).

England, who are on their first tour of Pakistan for 17 years, won the first and third games while the home team won the second and fourth — all in Karachi

Rizwan was once again the anchor for Pakistan.

He put on 97 for the opening wicket with his captain Babar Azam (36) but England pulled back the scoring rate once the Pakistan skipper holed out to spinner Liam Dawson in the 12th over.

Rizwan then added 52 for the second with Shan Masood (21) but David Willey dismissed Masood. Topley then had Khushdil Shah for two.

Rizwan was finally caught off in the 19th over off Topley who finished with 2-37.

Asif Ali smashed two sixes in the final over of the innings, runs that proved crucial.

England started badly as Nawaz dismissed opener Phil Salt off the fourth ball of the innings for eight. Then Hasnain accounted for Alex Hales for five and Will Jacks for nought in the second to leave England reeling at 14-3.

Harry Brook, who top-scored with 34, added 43 with Ben Duckett (33) for the fourth wicket and another 49 with skipper Moeen Ali (29) but Nawaz removed both his partners to give Pakistan a sniff of victory.

Brook hit a six and two boundaries off 29 balls.