Warne’s Warriors had excellent first match of the series and won it comfortably with a spare of 16 balls. Shane Warne himself had great opening match as a player and captain. He’ll be looking to do the same in today’s game. The good thing about first match was Warriors restricted Sachin’s Blasters below 150 after giving 70+ runs in initial 7 overs. 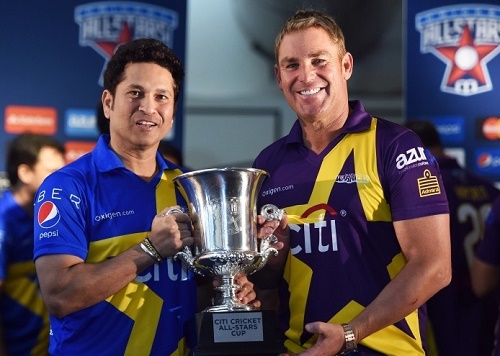 On the other hand legendary batsman Sachin Tendulkar will be looking to perform well as a batsman and captain in tonight’s match as he didn’t play as per his standards in the previous game. He played run a ball innings while batting along with Virender Sehwag who was hitting the ball all over the park and batting at more than 200 strike rate.

Sachin may bring some changes in the playing 11 as Sourav Ganguly can be seen playing tonight at the place of VVS Laxman. Let’s have a look at the Warne’s Warriors and Sachin’s Blasters squads.

Sachin’s Blasters will be favorites to win this match and they have got 55 percent winning chances over Warne’s Warriors.

United Kingdom based fans and viewers can watch live streaming of Warne’s Warriors vs Sachin’s Blasters 2nd 20-20 on Sky Sports online from 2 AM GMT.

Star Sports will be streaming live cricket all-stars 2nd t20 match in Indian sub-continent that includes India, Pakistan, Bangladesh and Sri Lanka. Match will begin at 7:30 AM IST on 12 November.

Canada viewers can watch the match live on TSN.

Sky Sports 2 will bring the live coverage of match in United Kingdom.

Australia based viewers can catch the live action of cricket all-stars 2nd twenty20 match on Channel 9 from 13:00 AEDT on Thursday.

Supersport to telecast the match live in South Africa.

New Zealand based viewers can tune to Sky Sport.

The latest updates and live score of cricket all-stars 2nd t20 match can be taken from espncricinfo.com and cricbuzz.com.