South Africa and Australia are scheduled to play second Twenty20 international of 2016 series on Sunday, 6th March at Johannesburg. This is going to be an exciting match between these two top cricketing nations as Aussies have already lost first game in the 3 match series whereas Proteas will be looking to win this match to make sure that they won’t loss series now.

Australia’s reputation is on the line in the second T20I of 2016 tour of South Africa as if they loss this match, they’ll lose 2nd successive twenty20 series in a row. Australia previously lost home twenty20 series against India by 3-0 and they will not be looking to repeat the same in this series ahead of going for big tournament like world cup. 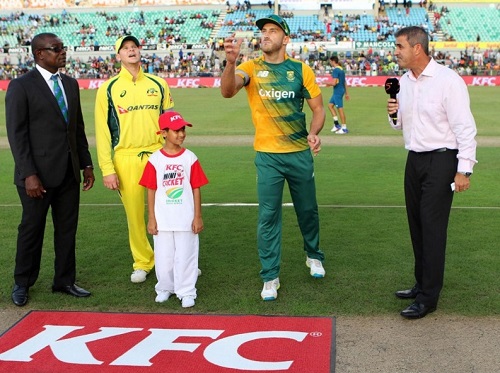 In the 1st t20, Australia had great chances to score big when they got fantastic start from top 3 batsmen. The collapse in middle order, really hurt them in Durban game. Steve Smith, Glenn Maxwell have to perform in the middle overs if Australia wants to win this and do well in the upcoming twenty20 world cup in India. Bowling is quite fine but still needs improvement.

On the other hand South African team will be again depending on their spinner Imran Tahir who took 3 wickets in previous match to put breaks on the score rate. Rabada and Abbott were sensational in the first t20 and will be looking to the same again on Sunday. Ab De Villiers was dismissed on the very first ball he faced in the match, hence he’ll be looking to make same runs in this match.

South African team will be favorite to win and they have got 57 percent winning chances over Australia in this vital second T20I at Johannesburg.

Previous: How to watch Asia Cup 2016 Final Live Telecast
Next: Lendl Simmons out from World Twenty20 2016