Sri Lanka cricket team has beaten West Indies in the first twenty20 international of two match series played at Pallekele International cricket stadium on Monday. With all-rounding performance from the team Sri Lanka registered 30 runs victory over visitors. Sachithra Senanayake was announced man of the match for his 4 wickets in West Indies inning. 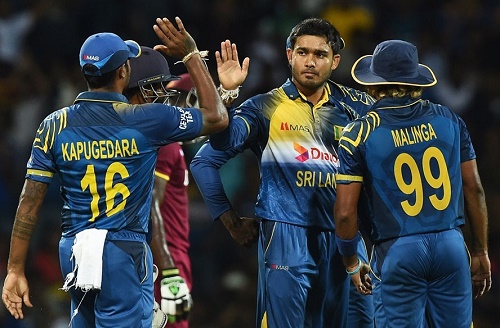 Winning the toss West Indies asked Sri Lanka to bat and their decision went against them. Sri Lankai openers Kusal Perera and Tillakaratne Dilshan built 90 plus runs partnership in first 10 overs of the match. Kieron Pollard dismissed Perera in the 10th over when SL was on 91 and Perera made 40 in 30 balls.

On the other end Dilshan was playing exceptionally well and he became first Sri Lanka batsman to reach 1500 international twenty20 runs. Dilshan completed his fifty before getting dismissed by Pollard in the 12th over of innings.

Shehan Jayasuriya, Dinesh Chandimal and Angelo Mathews played quick firing knocks for the team and took team’s total past 200. Sri Lanka made 215 runs for the loss of 3 wickets in 20 overs.

In the chase of 216 West Indies lost early wickets. Captain Lasith Malinga dismissed Charles in the first over whereas Senanayake took crucial wicket of Samuels in 5th over of match when visitors were on 29. Opener Andre Fletcher was standing like rock on one end whereas wickets were falling on regular intervals on the other end.

Andre Russell, Kieron Pollard and Dwayne Bravo got good starts but they failed to capitalized on it and took team to the close of target. Fletcher scored half-century in West Indian innings and returned to pavilion after scoring 57 runs in 25 balls.

West Indies team got all out in 19.5 overs after shortening to the target by 30 runs. Sachithara Senanayake became hero for Lankai team as he took 4 wickets. He was also named man of the match.

The second and final t20 match of series will be played on 11 November as the match was moved from 12 to 11.