In the eliminator of 2016 Vivo Indian Premier League, Sunrisers Hyderabad have registered 22 runs victory over two time IPL winner Kolkata Knight Riders match played at Feroz Shah Kotla. With this win, SRH have qualified for second qualifier match of tournament which will be played on 27 May against Gujarat Lions. Winner of that match will play Royal Challengers Bangalore in the final. 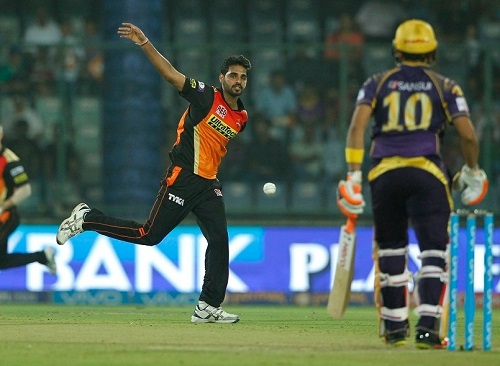 Sunrisers Hyderabad posted 162 runs on the board after completion of 20 overs. Stylish middle order batsman Yuvraj Singh scored valuable 44 runs in SRH innings while all-rounder Marcus Henriques made 31 runs. Bipul Sharma smashed two big sixes in the last over that helped the side to reach at challenging total against strong KKR.

In the chase of 163 runs target, Kolkata Knight Riders managed to score 140 runs in full over bowling quota. Manish Pandey was the highest run scorer for KKR as he made 36 in crunch situation but couldn’t take his team towards winning end. Marcus Henriques was awarded player of the match for his all-rounding performance.

Man of the Match: Marcus Henriques