Sunrisers Hyderabad will definitely be one of the hot favorite teams to win ninth edition of Indian Premier League. The fact is they have filled blank spaces in the playing line-up from previous edition to 2016 Vivo IPL. Yuvraj Singh and Ashish Nehra’s inclusion in the side has really strengthen their roster and will definitely be a team to look for.

Let’s have a look at the probable playing XI for SRH team in 2016 IPL.

The top order batting is set for Hyderabad and there are no questions about who will be the top 3 batsmen at the top. Shikhar Dhawan and skipper David Warner to open the winnings while New Zealand captain Kane Williamson will be batting at number 3 slot. All these three batsmen are destructive players and can do serious damage to opposition at any instant. 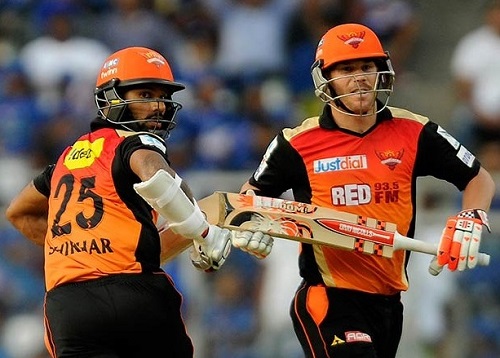 Like I said earlier, Yuvraj Singh’s inclusion in the team has really made an impact to Sunrisers Hyderabad Batting line-up which was missing in the middle overs in last IPL season. Not only Yuvraj Singh but English captain Eoin Morgan will also play crucial role in the middle overs for Hyderabad. Wicket-keeper batsman Naman Ojha and all-rounder Deepak Hooda can do some hard hitting in the death overs of the innings.

Ashish Nehra’s pick in the auction, would probably the best for Sunrisers Hyderabad as Ashish has been bowling very good since he has returned to international cricket. Eventually he made comeback in international cricket due to his good performances in previous IPL editions. So it will be a good bowling unit with Nehra and Bhuvneshwar at the top in bowling. Maybe Trent Boult can also start bowling at the top with Nehra. Karn Sharma will be the key spinner in the side while Deepak Hooda to play 5th bowler’s part in the side.

What do you think about Sunrisers Hyderabad team for this IPL season? Can they win their first ever Indian Premier League championship?