Royal Challengers Bangalore are having one of the best squads in Vivo Indian Premier League 2016 just like they have been attaining for past editions. Virat Kohli will be captaining the RCB team in the tournament just like he has been doing since appointed skipper of the side.

Shane Watson is the latest entry in Bangalore’s roster as owners purchased him in auction for 9.5 Crore INR. Let’s have a look at the expected playing 11 for Royal Challengers Bangalore in IPL 2016.

Well there are several players in the side who can open for RCB in the event. But Chris Gayle and Virat Kohli were best for the team in previous edition and we can expect them to do it again. South Africa’s destructive batsman AB De Villiers who is also known as 360 degree player, will be batting at number 3. It will give him more balls to play and go after opposition bowling. 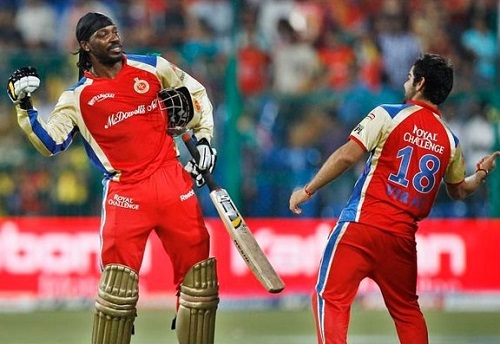 Shane Watson’s inclusion in the side has really made Bangalore’s middle order strong and increase the depth in batting. KL Rahul, Sarfraz Khan and all-rounder Stuart Binny can be handy and crucial for RCB in the tournament at the death overs. Shane Watson will definitely be crucial for team in both bowling and batting departments. It will be an interesting decision for Royal Challengers team management to decide players position in batting line up as anybody can bat at any number.

Mitchell Starc’s injury is a big concern for Kohli & Company as he is one of the best fast bowlers in the cricket world right now. But he won’t be available for the selection in initial matches and there is still question mark on his fitness for later games. Samuel Badree also got injured in the final of world t20, hence he will have to get fit to play. RCB will be depending on their all-rounders like Watson, Binny along with Kane Richardson, Parveez Rasool, Vikramjeet Malik and some other Indian bowlers.

What are your thoughts about Royal Challengers Bangalore team in this IPL season? Will they win their maiden Indian Premier League trophy this time?