Sunrisers Hyderabad to take on Mumbai Indians in the 12th game of Vivo Indian Premier League 2016 today at Rajiv Gandhi International Stadium in Hyderabad. Mumbai team will be looking to get their second victory in the tournament while Hyderabad to eye on their first win in the 9th IPL season.

Home team are trying hard to get settled playing XI and reach to the winning end. But unfortunately they have been failing to do so in the played two matches so far. David Warner & Co have got good players and all we can say is they are having a good side in the competition. But Yuvraj Singh and Ashish Nehra’s injuries, have made really a great impact on their playing line-up circumstances. 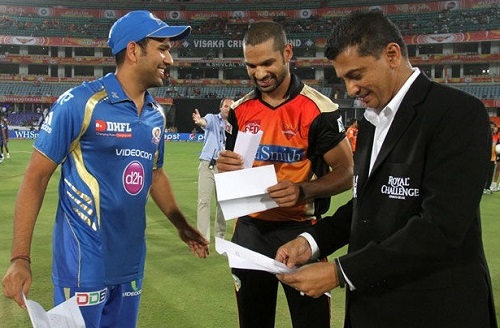 David Warner played good innings in the first match while he was flopped completely in the last game. The major concern with SRH team is that their top order is not playing well. Shikhar Dhawan, Naman Ojha, Eoin Morgan need to bat well and post good total to give challenge to strong Mumbai side. We might see Kane Williamson playing today at the place of Eoin Morgan as the left-handed batsman is not playing at a good pace. He is scoring runs but not fast which is required in this form.

On the other hand, Mumbai Indians are also looking to perform on continuous basis. Eventually just like Sunriseres, Mumbai are also struggling with their batsmen. Rohit played good innings against KKR but still he is not looking as confident as he used to be. Martin Guptill’s presence in the top order, will definitely be helpful for Mumbai Indians are he is in great form and can destroy any bowling line-up in the world.

Mumbai Indians will be favorite to win and they have got 57 percent winning chances over Sunrisers Hyderabad in the 12th game of Vivo IPL 9.