Khary Pierre, Trinbago Knight Riders are up to meet sinking Guyana Amazon Warriors in the 9th match of Caribbean Premier League 2017 today. Both teams are heading into the game after losing their respective previous matches. Eventually Guyana Amazon have lost two games in the season while Knight Riders have just lost one in played 3 matches so far.

Three times final playing Guyana Amazon Warriors will be seeking their first victory in the 5th edition of Hero CPLT20 against Trinbago Knight Riders tonight. Big match for them as if they loss tonight, it will be difficult for them to make it into semi-finals. 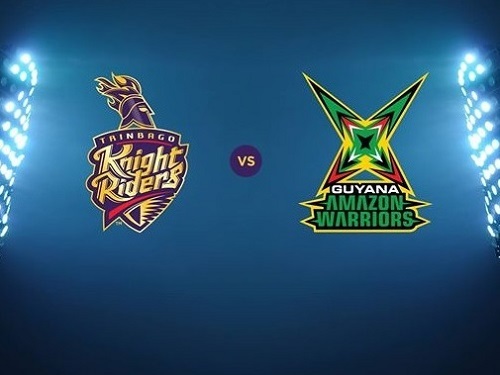 Skipper Martin Guptill has to bat very well to ensure his side puts enough runs on the scoreboard. Middle order needs to fire for Warriors as Babar Azam, Walton, Joseph and Primus haven’t played as per their caliber. GAW camp had great hopes from Rashid Khan but he hasn’t performed that he displayed during IPL. So team will be expecting him to bowl really well to restrict Knight Riders destructive batting lineup.

On the other side, Dwayne Bravo & Co. will look to comeback on winning ways after losing only game of the season against Jamaica Tallawahs. McCullum, Munro, Bravo brothers and Perkins are the key batsmen in the side and these have to score big and quick runs today. Meanwhile Shadab Khan and Sunil Narine have been splendid in the spin bowling department for Trinbago Knight Riders.

We can expect some hard hitting from the players at The Port of Spain in Trinidad. The projected score is expected to be 160 around while team batting first.

Trinbago Knight Riders are looking much better and balance side than Guyana Amazon Warriors. As per our predictions, TKR have got 60 percent winning chances over GAW.