West Indies cricket team has defeated ICC World T20 2016 tournament host favorites team India in the semi-final match. The Caribbean team won the semifinal by 7 wickets to qualify for the final where they will be playing England on 3 April. Lendl Simmons scored the match winning half-century for West Indies to win this big knockout match at Wankhede Stadium in Mumbai. 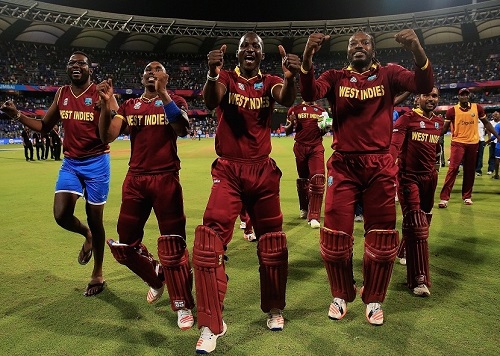 Everything went into West Indies team’s favor as they won toss on this batting support pitch which was not helpful for bowlers, especially in the second innings. India had great start and openers Rohit and Rahane put up 50+ runs on the board in first six overs. After this Rohit got out and Virat Kohli took charge. Both Virat and Rahane scored runs at good pace especially Kohli who has been the leading run scorer for side in the tournament.

Virat Kohli scored excellent 89 runs not out in 51 balls to guide Indian team towards big total of 192. In the chase of such big total, West Indies lost their biggest batsman Chris Gayle in the second over and their hopes were threatened. But returning to squad and playing XI, Lendl Simmons and opener Johnson Charles did brilliant job and built 97 runs partnership for 4th wicket. Charles returned to pavilion after scoring 52.

Later on Simmons and Russell finished of things for West Indies and the team reached to the final for the second time in history of championship where they will play England on 3 April.