Third match of ICC T20 world cup 2016 is scheduled to play between Bangladesh and Netherlands on 9th March at HPCA Stadium in Dharamsala. This is the first game of Group-A in Wt20. It will be an interesting contest as Bangladesh team are coming from giving good performance in Asia Cup whereas Netherlands lost their warm up game.

Bangladesh is in tremendous form and they will be favorite to make their way for the second round of tournament. They were runner-up in recently concluded 13th edition of Asia Cup. Tigers defeated Sri Lanka and Pakistan teams in that competition and will be carrying great confidence for t20 world cup. Skipper Mashrafe Mortaza has been doing good captaincy and he is very clever on the field. 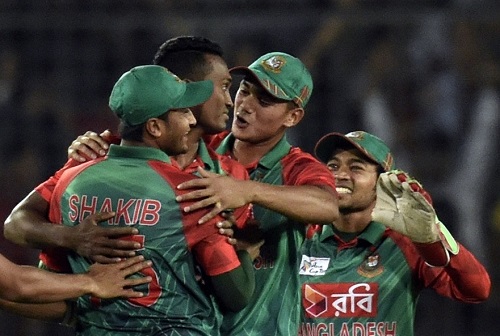 Bangladesh all need to control themselves and perform better in the first stage of WT20. Team is heavily relying on top batsmen like Tamim Iqbal, Soumy Sarkar, Sabbir Rahman, Mahmudullah and Mushfiqur Rahim. All-rounder Shakib Al-Hasan is the heart of batting and bowling for Bangladeshi team. Taskin Ahmed, Mortaza, Al-Amin are the crucial bowlers for Men in Green in this event as well as match against Holland team.

On the other hand Netherlands team will be looking to give tough competition to the rising Bangladeshi side. Captain Peter Borren will be depending on his prime players Ben Cooper, Tom Cooper, Musassar Bukhari, Rippon and Barresi. Netherlands lost their first practice match against Afghanistan and their second warm-up match was abandoned due to rain.

Tom Cooper scored sensational 50 in first warm-up whereas Stephen Myburgh smashed 58 in the second practice match. So these two players will be vital for Holland and can do big damage to Bangladesh. Let’s have a look at the squad for both Netherlands and Bangladesh for 3rd match in world t20 2016.

Bangladesh cricket team will be favorites against Netherlands in this third match of ICC World T20 2016 on Wednesday. Tigers have got 65 percent winning chances over Dutch team.

On This Day in 2009: Netherlands shocked England at T20 World Cup