First match of Caribbean Premier League’s United State leg is all set to play today at Central Broward Regional Park Stadium Turf Ground between second teams from top and bottom spots in points table. Barbados Tridents have been going through a poor season and just managed to win 3 matches in played 8 games so far meanwhile Guyana Amazon Warriors have won 5 games out of 8 matches so far. 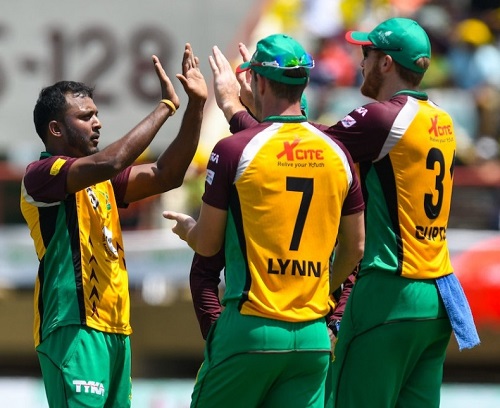 Guyana Amazon just need one more victory to seal their playoffs berth. Rayad Emrit & Co. has lost two previous matches against Jamaica and St. Lucia which wasn’t expected from them. The last game defeat of 9 wickets against Zouks was set back for the side. Chris Lynn, Dwayne Smith, Nic Maddinson have to bat well and score big runs to put pressure on Barbados side which is struggling with their battling lineup.

Kieron Pollard, Shoaib Malik and Ahmed Shehzad have not played as per their strengths and capabilities. Obviously Barbados is missing Mr. 360 player AB De Villiers as he has already returned to South Africa for national duties. Malik and Shehzad have to score big runs to take team towards playoff as BT can’t rely only on Nicholas Pooran to score all time.

Guyana Amazon Warriors look favorite against Barbados Tridents and as per our predictions they have got 70 percent winning chances.