Brisbane Heat are set to take on Hobart Hurricanes in the 10th match of KFC Big Bash League on 30 December 2016 at The Gabba in Brisbane. The match has been scheduled to begin at 18:10 local time, 8:10 GMT and 13:45 IST. Brisbane Heat vs Hobart Hurricanes live cricket match telecast will be aired live on Channel TEN and Star Sports 2.

Brisbane Heat would be eyeing to keep their momentum in the tournament and will look to register win against destructive Hobart Hurricanes. The past record of Heat is not good against Hobart as they have lost 6 games in the history till date against Hurricanes meanwhile just managed to win 3. 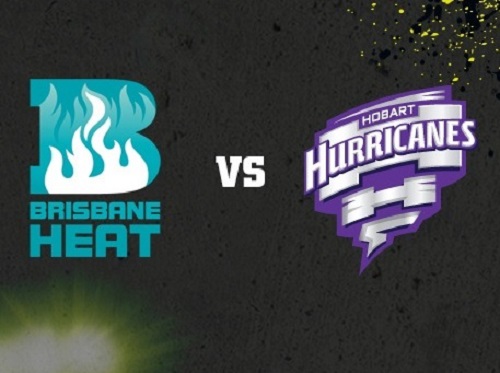 However records are just number and not a big connection with present. The way Chris Lynn batted and turned around the match against Thunder last night, it was terrific. He made unbeaten 85 runs while chasing 160 target versus title defenders.

Meanwhile Brisbane’s top order batsmen will need to score runs so that team can put pressure on inform Hobart Hurricanes. Meanwhile Hurricanes lost their previous game against Melbourne Stars but their batsmen are in prime form. In the first match they smashed 206 runs meanwhile in the second they put 188 runs on the board.

Hobart Hurricanes are disappointing with their bowling performance as bowlers are conceding runs too many. In the first match Sixers almost chased the 206 runs target meanwhile team lost the match after putting 188 runs on the scoreboard.

Hobart Hurricanes are looking much better side than Brisbane Heat for this 2016-17 KFC BBL edition. As per our prediction, Hurricanes to win this match and they have 60 percent chances.