The final match of Micromax Asia Cup 2016 will be played on 6th March at Sher-E-Bangla cricket Stadium in Mirpur, Dhaka from 19:30 local time. Two best teams of tournament India and Bangladesh will be facing off each other in the final to become Asian champions. (Check: Asia Cup 2016 results) 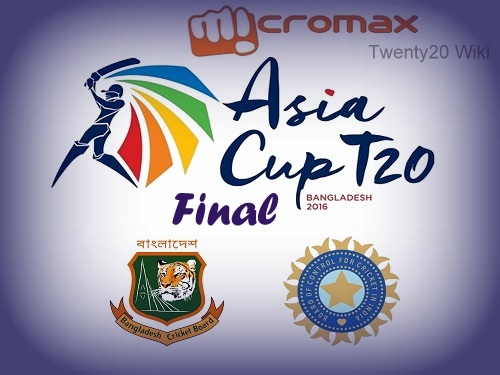 Indian team won all their group matches to get into the final whereas hosts Bangladesh won 3 games in the competition. Bangladesh lost only match against India which was the first game of 2016 Asia Cup. Let’s have a look at the complete guide about this India vs Bangladesh final in Asia Cup.

When is the final?

Where it will be played?

Sher-E-Bangla Stadium in Mirpur, Dhaka will host the final of Asia Cup 2016.

How teams reached to final?

Bangladesh have never won Asia Cup trophy. They played only asia cup final in 2012 against Pakistan which they lost by 2 runs. It will be their second appearance in Asia Cup final on 6th March.