Kings XI Punjab have appointed David Miller as the captain for Vivo Indian Premier League 2016 tournament beginning from 9 April. The South African middle order batsman made debut in IPL 2012 and since then he has been associated with the franchise. Miller is happy and delighted to know he’ll be leading KXIP in the 9th edition of cash rich twenty20 league. 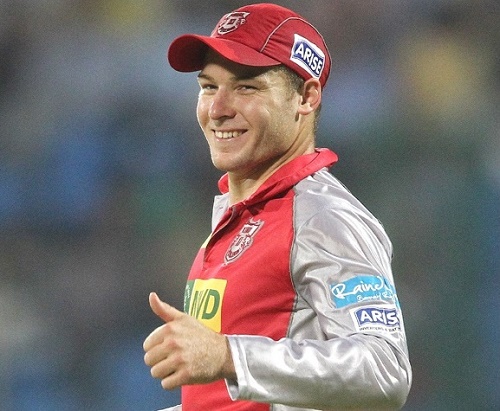 David Miller said, “I am honoured to lead the Kings XI Punjab squad this year. I would like to thank the franchise: promoters, management and all the team members for the confidence they have in me. Kings XI have assembled an exciting squad with a good mixture of youth and experience and I am really looking forward to the opportunity that lies ahead.”

Miller has played 47 matches in his IPLT20 career in which he scored 1319 runs till now at an average of 42.54 with 147.53 striker rate. For Punjab he smashed one century too. The Kings 11 Punjab promoters believes that Miller is a great choice for the team and his leadership skills may guide team towards first title win.

KXIP promoters said, “David Miller is one of the most talented and explosive players in contemporary cricket and we are so pleased that he has been an integral part of the team. We have complete faith in his capabilities and leadership skills and look forward to a successful season.”

Kings XI Punjab head coach Sanjay Bangar also faiths Miller and believes his capabilities and leadership qualities will definitely help the team in 2016 Vivo IPL. Sanjay Bangar said, “I have watched David grow as a player. He has displayed outstanding batting abilities and a cool temperament in many high-pressure situations. I am confident in his potential to lead the boys this season.”

The 2014 IPL was the best ever tournament for KXIP where team was runner-up.